A person clutching on an empty wallet. January is generally a bad month for all Kenyans. What are some of the options that Kenyans can turn to during the month?

If there is a month Kenyans would gladly skip and never look back, January would fit the bill. But wishes have never been horses.

Kenyans have huge dents in their pockets after sending children to school, this time with the added baggage of the expensive Competence-Based Curriculum (CBC). When you factor in the fact that education expenses followed a month-long of penny-draining merrymaking you easily sympathize with many Kenyans who find themselves broke.

Whereas most people’s budgets are stretched to the limits, those who explore the different set of options available wouldn’t fill the pinch of Njanuaary as the first month of the year is commonly referred to. Instead, the pain of January would be spread throughout the rest of the year.

Financial technology and planning have evolved, giving Kenyans a flurry of options that they can deploy at their own convenience. Below we assess some of them.

Mobile lenders have been on the receiving end ever since they arrived to the scene. Most Kenyans harbour reservations on the high-interest rates charged by the digital lenders and data breach claims.

While all that might be true, there are cases as reported by Business Today where Kenyans have used little capital and built big businesses. The best example is one of an engineer who built his real-estate company using student loans.

Assuming you have a budget deficit of Ksh10,000 which can be availed to you by mobile lenders payable in a month’s time with Ksh1,400 as interest, it makes sense borrowing and paying back in February when you receive your January salary or when you reconcile your books for the month.

Saccos are probably the best option for anyone in need of money that is not intended for business. Saccos operate a model where you contribute monthly and if you maintain that for a given period of time you become eligible for a loan three times the amount you have contributed.

Some Saccos also come to the rescue of members experiencing difficult times if a formula to pay back the money can be agreed upon making Saccos a plausible option in January.

Many would question the motive behind exploiting the Sacco option for personal use instead of business. Well it is possible to use the Sacco to bail yourself out whenever necessary.

This one of them most available options for accessing easy credit. Unlike mainstream banks, microfinance institutions are more lenient with Small and Medium Enterprises (SMEs)and have relaxed lending terms.

Most micro-finance institutions, such as Mwananchi Credit Ltd, offer short-term loans ranging from Ksh10,000 to Ksh20 million if you are able to provide collateral.

Logbooks, title deeds, salary, guarantors and shares of listed companies can all act as collateral. Interest rates vary depending on the institution but the charges may be higher than mainstream banks given the higher risk of their lending model.

Mwananchi Credit, one of the leading microlenders in Kenya, also offers cheque discounting, LPO financing as well as salary financing and trade finance.

This is also a viable option especially if you maintain a healthy credit score with the people next to you. It is extremely important to make sure that you never default on loans acquired from family and friends because they are the easiest people to ask for interest-free credit.

If you are that kind of person, then it is very likely that family and friends will not hesitate to extend you a hand of assistance.

This option is attractive because at times it does not limit you to the very specific conditions that lending institutions impose on a borrower thus allowing you some wiggle-room to make the best use of the money and reap as much as you can from the investment. 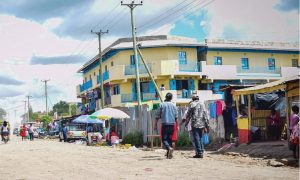 5 Reasons You Need to Invest in a Commercial Plot Before Turning 40
Commercial plots can be used to build commercial houses, residential…