A leading regional supermarket in tottering on the brink of collapse after falling into a financial hole, leaving hundreds of employees without jobs. Mulleys Supermarket, which has established itself in eastern Kenya and Nairobi regions, is understood to be undergoing financial problems that have forced it to close at least five branches.

A notice from management informed staff in the affected branches that they were closing temporarily to allow for ‘restructure and reorganisation’ of its business. “We wish to inform you that Mulleys Supermarket is currently undergoing a necessary process of restructure and reorganization of its business,” says the undated notice, which was released on Saturday 13th October 2021.

The five branches represent half of its 10 branch network. The supermarket which has presence in four counties of Nairobi, Machakos, Kitui and Makueni is struggling to stay afloat due to mounting debts that have left its shelves for the most part empty as suppliers shy off.

In a script similar to recent retail collapses of Choppies, Nakumatt Holdings and Tuskys, an ambitious expansion appears to have choked Mulleys operations. In the restructuring, it has closed two of its main branches in Machakos town – Mulleys Express near Machakos bus station and Mulleys Pioneer opposite Machakos General Hospital.

According to a notice posted at the entrances of the closed outlets, the supermarket management said the other branches would remain operational during the restructuring and reorganisation process.

“For this reason, we will temporarily close this branch and direct all our activities to Mulleys Embakasi, Mulleys Mtaani (Mlolongo town), Mulleys Masaa (Machakos town), Mulleys Emali (Emali town) and Mulleys  Jibambe (Tata town) branches, which will remain open during the period of transformation.”

>> Alfred Mutua: I Made a Fortune In Dubai Then Came Home

Signs that the debt ridden retail chain was struggling with possible cash flow problems became evident six months ago when products begun disappearing from the shelves, according to regional news site Facingeast. The supermarket has lately been unable to stock essential products like milk, bread, sugar and foodstuffs after suppliers stopped servicing orders over delayed payments.

Stocks for clothes, electronics, furniture, and other non-essential products across all branches were depleted as early as last year.

Efforts to reach Mulleys Chief Executive Officer Kevin Mulei were fruitless as his calls went unanswered but one of the directors, Ms Itumbi Mulei, said it had reached a point where they were making painful business decisions to stay afloat.

Ms Itumbi declined to discuss the challenges facing the Supermarket which opened its first branch in 2010, only saying the directors of the family business needed humble time to deal with the matter. “At the moment, what we need is peace of mind to strategise on a market comeback. We’ll be issuing a comprehensive statement soon,” said Ms Itumbi.

>> Who Who Don’t Ask For Directions Drive For 400km

Last month, the Supermarket dismissed rumors that it was facing cashflow issues through a public relations plea by Comedian Daniel Ndambuki alias Churchill.

While admitting that there have been empty shelves, Mr Ndambuki in a series of Tweets said the management was doing its best to restock and assured people that the supermarkets were not on the verge of closing. 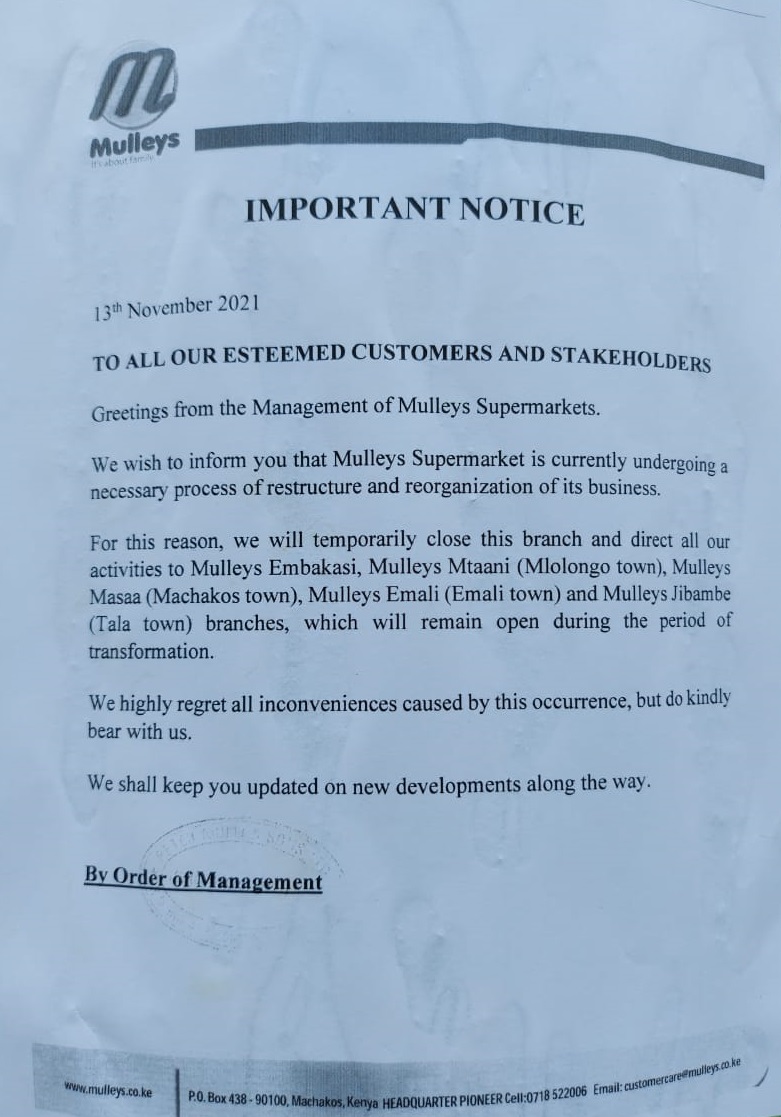 “This year has been tough for businesses. Many rumors have been circulating about the real position of Mulleys Supermarkets. Having contacted them, they have assured me they are working on a restocking strategy and soon they will have everything restocked back on their shelves.” read one of Mr Ndambuki’s Tweets.

>> No More Listing On CRB – What CBK Is Plans For Borrowers

The comedian called on Kenyans to support the business by buying from them whenever possible. The supermarket, which until 2010 used to trade as Peter Mulei & Sons Limited, was established in 1969 as a wholesale business by the founding patriarch, the late Peter Ngumbi Mulei.

The business thrived into a well-recognized local brand and a household name in in area of operation. Over the last six decades, the business flourished within Ukambani region before diversification into supermarket business in 2010 which had grown into 10 branches, employing more than 2,000 staff

“We highly regret all inconveniences caused by this occurrence, but do kindly bear with us. We shall keep you updated on new developments along the way.

>> Businessman With Hardballs Makes a Fortune

Big Names Out As NMG Kicks Out Senior Journalists