Cabinet Secretary for Sports and Culture Amb. Amina Mohamed poses for a photo with the entire Harambee Stars team during her surprise visit to the team's training camp in France.

Sweden based Christopher Mbamba alongside Clube Olimpico do Montijo’s Clifton Miheso are both among the players dropped by Harambee Stars coach Sebastien Migne ahead of the African Cup of Nations (AFCON) set to begin on 21st July in Cairo, Egypt.

Other players dropped by the French tactician are Maritzburg United’s Brian Mandela and Zesco United’s Anthony Akumu. Mandela had initially been confirmed to miss the tournament after picking up an injury in training on Monday.

Akumu joins his Zesco United teammate Jesse Were who was never called to the squad in the first place, an act that led to controversy as many thought he should have been included. Migne, however, defended his actions saying Were did not have what it takes to make the squad despite being among the top scorers in Zambia.

Miheso’s selection was not welcomed by some Kenyans who said that the player has not been getting enough playtime or rather no one knows if he does. Miheso has been a frequent member of the Harambee Stars team but his career started taking a dive after his contract was terminated by South African club Golden Arrows.

Christopher Mbamba, on the other hand, had just made his first call up to the Kenyan national team but will  seemingly have to wait longer to play his first competitive match for Kenya. Mbamba is born of a Kenyan mother and a  Zimbabwean father but he has never played for Kenya as he featured for the Swedish Under 20 team when he was still a teenager based in Sweden.

Injury threatened defenders Aboud Omar and Musa Mohamed have been included in the list. Vice-captain Musa Mohamed had picked up a knock durig Harambee Stars’ friendly match against Madagascar on Friday. Aboud limped off late in the match.

Stars will play their second and final friendly match against DR Congo before they jet to Egypt for the continental tourney. They will play their first match at the tournament on 23rd July against Algeria.

Kenya was pooled alongside Algeria, Senegal and Tanzania in Group C of the competition. 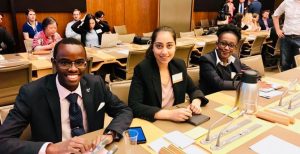