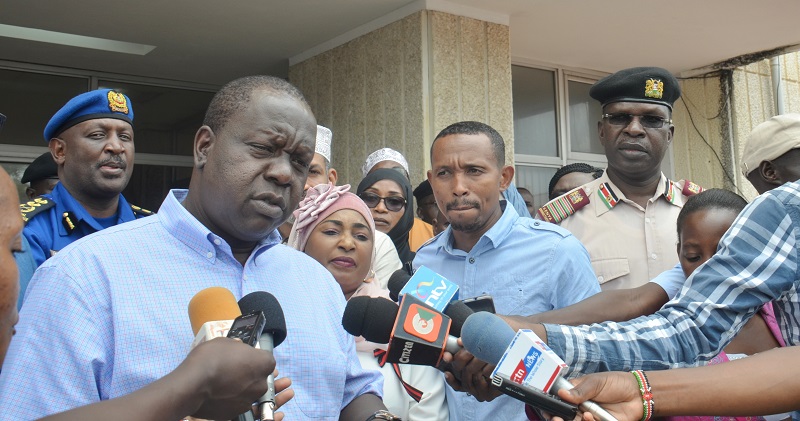 Drug lords of Mombasa have been put on notice. Cabinet Secretary (SC) for Interior Fred Matiang’i on Sunday declared ‘total war’ to deal with the drug abuse in Kenya and the Coast region, which is the most affected in Kenya due to the tourism business.

Dr Matiang’i said the problem of drug abuse in Kenya, and in Mombasa and the entire Coast region in particular,  had received lip-service for far too long and it’s time to take painful decisions to eradicate the vice. It’s not going to be an easy task as the drug business is run by cartels who include high-ranking government and administration officials.

“We are about to roll out an unprecedented operation to flush out drug peddlers in this region,” said Dr. Matiang’i at Uhuru na Kazi Building in Mombasa after chairing a meeting that brought together security chiefs from the region and elected leaders.

The CS who was accompanied by the Inspector General of Police Hilary Mutyambai said the government will provide the necessary support to security teams to effectively combat the drug abuse in the region. “Kenyans are tired of promises and threats and therefore it’s time to deal with this menace head-on.”

The CS noted that President Uhuru Kenyatta has initiated meaningful programs to benefit the youth in the country but said this was being frustrated by drug barons whose main agenda is to make money at the expense of the youth. “We are commencing a painful journey but we are determined to end the drug menace in this region,” added the CS.

He also warned politicians behind the revival of criminal gangs that they will be dealt with severely regardless of their status. Prof Kingi said the County government will team up with the national government in the fight against drugs, saying the problem has adversely affected the youth in the area.

In June 2011, the Global Commission on Drug Policy (GCDP) released a report that declared ‘the global war on drugs has failed, with devastating consequences for individuals and societies around the world.

To demonstrate the usage of hard drugs was on the rise, the Commission reported that between 1998 and 2008, global use of opiates increased to 34.5%, cocaine 27% and cannabis 8.5%.

Addicts spend virtually all their income on drugs and other banned substances to satisfy their cravings.

Kenya and Tanzania have become key transit points for drugs destined for Europe and the United States of America. In a report published last year, the US State Department said, ‘Kenya is a significant transit country for a variety of illicit drugs, including heroin and cocaine with an increase in domestic use population.’

Though drug abuse is prevalent in several urban centres in the country, the problem is more rampant in the coast region. According to the National Campaign Against Drug Abuse (NACADA), Mombasa alone has 38,000 addicts.

Project Director of Citizen Against Child and Drug Abuse Faroq Saad decried that drug users in Mombasa County spend about Ksh.2.2 million to consume heroin daily. Saad said the addicts spend virtually all their income on drugs and other banned substances to satisfy their cravings.