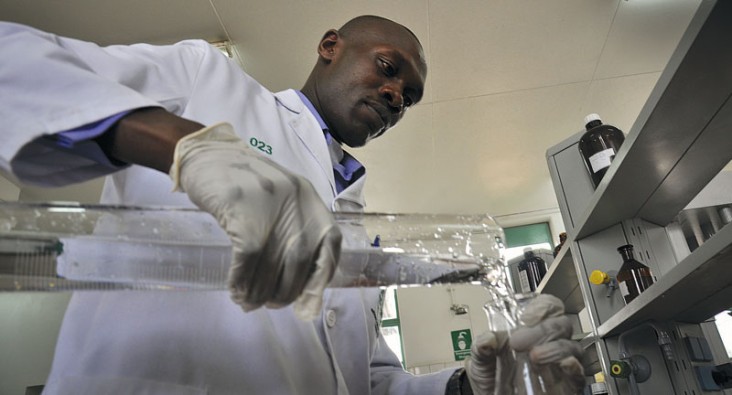 [dropcap]T[/dropcap]here is some light at the end of the tunnel after scientists at the Kenya Medical Research Institute (KEMRI) Kisumu announced that they were about to develop an HIV vaccine that is safe, effective and affordable with 50% efficacy in the next two years.

The scientists’ efforts have generated excitement and now researchers are working round the clock to improve the efficacy of the soon-to-be-unveiled drug to above 50% in the hope of providing HIV protection to six million people in the next 20 years.

Subsequently, numerous partners have committed to funding the study in the belief that in the next twp years, mankind could rejoice with the projection that if the efficacy is improved to 70%, then 28 million people could enjoy HIV protection.

The study also tests a new idea for HIV prevention unlike traditional vaccine studies where researchers gave clients a vaccine and waited to see if their bodies will make antibodies against the disease. In this one, researchers will be skipping a step and just give people the antibodies directly through an infusion, also known as an IV or a drip.

This is the first study testing whether the antibody can prevent HIV infections in people. Currently, trials are being conducted in Kenya at KEMRI/CDC, Kisumu and are in phase III of the clinical trials.

Other tests are being done in Uhambo and Imbokodo both in South Africa. The first phase of the Clinical Trials lasts for 12 – 18 months, phase II runs for 2 years, phase IIb goes for 2 – 5 years while phase III lasts for 3 – 4 years.

These trials seek to establish whether both neutralising/non-neutralising antibodies can be tweaked to provide a reasonable vaccine in high-risk regions. This will then set the stage for the entire design overcoming HIV diversity (the Mosaic vaccine).

It is prudent to point out that a mosaic protein or peptide is an artificial recombinant protein.

The strain of HIV1 is common in Kenya while HIV2 is largely found in South Africa, West Africa, and North African countries.

However, HIV1 grouped under cluster M is the strain of HIV responsible for the global HIV epidemic, which falls under sub-clusters A, B, C, D, F, G, H, J and K, according to experts who presided over one-on-one discussions with journalists from Western Kenya on Wednesday at a media café convened by Media for Environment, Science, Health & Agriculture (MESHA) in collaboration with KEMRI at Kisumu County Hospital.

“Females accounted for 74% of new infections among adolescents with Kenya ranked 3rd highest contributor of new HIV infections in adolescent girls and young women,” he noted.

Although there is no effective HIV Vaccine currently, so far 30 experimental vaccines have been tested in 60 trials since 1987. Since then, the need for a vaccine has not changed as HIV continues to surge despite the fact that many are on ARVs/ARTs drugs.

“Under these trials, 64 – 82 participants have been recruited with each of them set to receive 10 injections over the next two years,” he revealed.

KEMRI Kisumu has pioneered the HIV injection intervention. “Although a lot has been achieved in the fight against HIV over the last 40 years, there has been an increased HIV infection among stable partners”, he pointed out.

He added that Truvada (ARV) which is a Nucleotide Reverse Transgressive Inhibitors has been successfully applied alongside Pre-Exposure Prophylaxis (PrEP) which acted as a wall against both strains of HIV-1 and HIV-2. “Whereas the study recruited a population of 3,600 in Africa of which 1,900 were women compared to America where men remained the majority”, he said.

Asked whether the national and county governments allocated adequate resources to facilitate medical research in Kenya, Dr Oketch pointed out that one Vial Vaccine costs Ksh 100, 000 and so the meager Ksh 20 million the Kenya government sometimes back allocated for it could only buy 200 Vials.

READ: BEST COMPANIES TO WORK FOR IN KENYA

This, therefore, leaves development partners to shoulder the heavy burden of funding such expensive undertakings. He urged the two levels of government to consider allocating more funds for research work to stop overrelying on international partners for such support.

Arthur Ogendo, KEMRI/CDC Coordinator for Kisumu, said the vaccines currently being tested has demonstrated notable success but are yet to be subjected to further rigorous tests. Scientists reveal that there is currently no licensed HIV vaccine and so prevention options include a combination of structural, behavioural and biomedical interventions.

KEMRI and the US Center for Disease Control and Prevention (CDC) are conducting a pivotal study to evaluate the safety and efficacy of these vaccines. Dr Oketch said this is the first study to evaluate whether antibodies can prevent HIV infections in people.

In pre-clinical and early clinical trials, the vaccine was able to neutralise many strains of HIV (90%).

He revealed that the study is being sponsored and funded by the United States National Institute of Allergy and Infectious Diseases (NIAID) through the HIV Vaccine Trials Network (HVTN) in collaboration with HIV Prevention Trials Network (HPTN).