Equity Group Holdings has made a critical step in its quest to have a foothold in the  Democratic Republic of Congo’s banking industry by reaching a deal to buy out a local tycoon who holds a majority stake in a commercial bank.

Equity Group Holdings (EGH) announced today it had entered into a share purchase agreement with Mr George Arthur Forrest to acquire 66.53% of the shares he holds in Banque Commercial du Congo (BCDC), a public limited company.

George Arthur Forrest is a Belgian entrepreneur, owner of the Forrest Group (Groupe Forrest), a group of companies founded in the Belgian Congo in 1922 and active in wind power and hydroelectric energy, construction, mines and metallurgy, biological food and aviation, according to Wikipedia.

Forrest has been described as a philanthropic employer and is reported to be one of the richest men in Congo.

BCDC business will eventually be amalgamated with that of EGH’s existing banking subsidiary in DRC, Equity Bank Congo S.A. (EBC).  The agreement is subject to regulatory approvals from amongst others, the Central Bank of Kenya, Banque Centrale du Congo, the COMESA Competition Commission and the boards of BCDC and EGH.

The deal specifies that EGH will pay a cash consideration of $105 million (Ksh10.5 billion) for the 625,354 shares to be purchased inclusive of dividends declared after 1st January 2019 in respect of the financial year ending on 31st December 2019. That is, a cum-dividend price per share of $167.9 per share.

“George Arthur Forrest is happy to conclude the transaction with EGH knowing that his legacy is in the hands of the fastest developing Bank in Sub-Saharan Africa, already present in DRC, with the aspiration and capacity to develop and grow the offerings and financing of BCDC,” Dr Mwangi said. 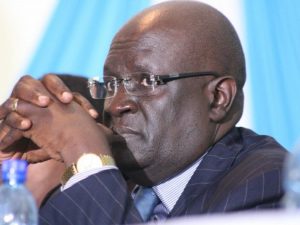