Interior CS Fred Matiang'i gestures during a pst event. The Ethics and Anti Corruption Commission has in its 2018 . report ranked The Ministry of Interior and Coordination of National Government as the most corrupt.

Kenyans believe that the Ministry of Interior and Coordination of National Government is the most prone to corruption followed by the Ministries of Health and Agriculture.

The National Ethics and Corruption Survey 2018 released by the Ethics and Anti Corruption Commission on Tuesday reveals that Kenyans, for the second year in a row believe that the giant ministry is yet to put in place structures that will instil public confidence in its service delivery despite efforts by Cabinet Secretary Fred Matiang’i to portray his docket as a “clean entity”.

A whopping 47.5 of Kenyans believe that Matiangi’s ministry followed by Sicily Kariuki’s Ministry of Health (17.9%) and Mwangi Kiunjuri’s Ministry of Agriculture and Irrigation (13.8%) are irredeemably corrupt.

The three giant ministries are closely followed by The Ministry of Lands (11.0%) under the stewardship of Cabinet Secretary Farida Karoney, James Macharia’s Ministry of Transport and Infrastructure Development (10.4%) and George Magoha’s Ministry of Education (6.8%).

The Ministry of Industrialisation and Enterprise Development is ranked the least corrupt with 0.4% of the queried respondents linking it to corruption.

The list of agencies where Kenyans are likely to encounter corruption bears the usual suspects; The Kenya Police (39.0%), The Kenya Power and Lighting Company (12.9%), The National Hospital Insurance Fund (NHIF) (11.1%) and the National Youth Service (NYS) (9.5%).

The courts also feature high in the corruption list (8.0%). The Judiciary has over the years struggled to shake off the corrupt tag and features at fifth position in EACC’s list.

KTDA has been on the news for all the wrong reasons over low tea bonuses. Farmers want the agency’s managers out over the authority’s mismanagement while Huduma Centres are notorious for procrastinating key services.

This will be a hard tackle for the police considering that the report has been released one week after the service was put on the spot for clobbering unarmed students at the Jomo Kenyatta University of Agriculture and Technology (JKUAT) during a strike where the students were protesting runaway insecurity around the institution that had led to the death of two students.

The report reveals the average bribe paid by Kenyans to access government services in 2018 is Ksh3,833, the lowest posted since 2012 down from the Ksh5,058 recorded the previous year.

The Registrar of Persons under the Immigration Department is ranked the most corrupt institution at 19.9% closely followed by Public Dispensaries/ Hospitals (19.7%), Police Stations (17.2%) and Chief’s/ Village Elder’s Office (16.0%).

See also: How Multinational Corporations are Stealing from Kenyans 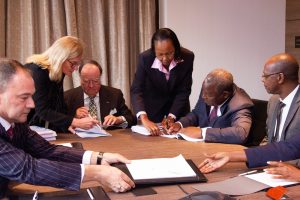 In a Daring Move, Kenya’s Equity Buys Bank From DRC Tycoon
BCDC business will eventually be amalgamated with that of EGH’s…