The Independent Electoral and Boundaries Commission (IEBC) has advertised more than 350,000 jobs in preparation for general elections slated for August 8th  this year. [see full list of jobs and application details at the bottom]

The selected team will work for a period of between nine days and two months depending on the position, with clerical officers having the lowest work period.

Also Read: Ten thing you should never include on your CV

On the transport and logistics sector, 337 officers will be employed for a period of 30 days to plan and ensure things flow seamlessly.

Lastly, the Wafula Chebukati-led team will hire two constituency ICT clerks who will oversee the electoral equipment for 30 days.

Next Read: 15 questions your are likely to be asked at the interview

This comes days after the Kenya Integrated Elections Management Systems (KIEMS), supplier to the Independent Electoral and Boundaries Commission (IEBC), confirmed the arrival of 10,080 electoral kits on 2nd June.

The tally of electoral kits in the country stands at 35,000, 10,000 less of the expected number to match the current number of polling stations. 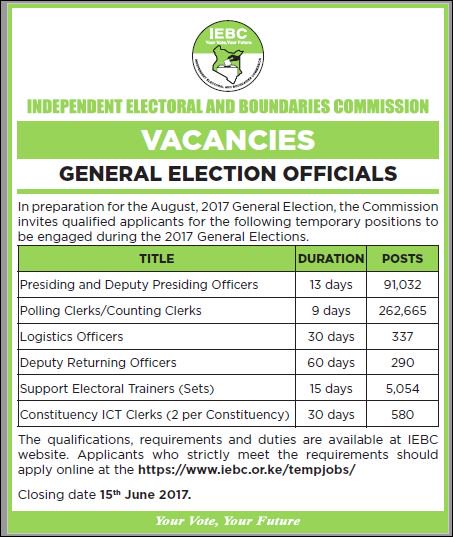