If found g****y, Alex Mutuku could become Kenya’s ‘best’ cyber c******l. The University of Nairobi  information systems graduate is battling a number of cybercrime cases in courts, most of them involving big financial institutions. The latest case, which got him caught, involves the loss of Ksh4 billion from the Kenya Revenue Authority (KRA).

His story reads like a thriller movie of a young man who makes lots of money, swims in it and ends up drowning. Mutuku and eight others were recently a******d in a police operation in connection with h*****g and s******g from state agencies such including the National Transport and Safety Authority (NTSA) and the Independent Electoral and Boundaries Commission (IEBC) and Saccos.

Earlier, in January 2015 Mutuku, together with Stanley Kimeu Mutua, were accused of h*****g NIC Bank system, s******g Ksh2.8 million and threatening the bank with exposure if it did not pay them Ksh6.2 million in bitcoins, the virtual currency that is traded online and has at times been used by c*******s to launder illicit gains.

Later on, Mutuku was a******d and charged with manipulating Safaricom’s computer system and s******g electronic airtime worth Ksh20,000. He denied the charge, saying that Safaricom singled him out among the other s******s because of the NIC case.

“I was a******d in early January (2015) for allegedly h*****g into NIC Bank. The case is ongoing. Now when Safaricom was h****d and it found that I, like other subscribers, had bought the stolen airtime without knowing, they were very quick to arraign me,” Mr Mutuku said in an interview with Business Daily in April 2015.

After being profiled in the Business Daily, he rewarded its publisher, the Nation Media Group, by administering a ‘dose’ of what they praised him for. He was reported to have h****d in Nation Media Group digital systems and found a way to access the Daily Nation e-paper for free, using a programme he had developed as a first-year student at the University of Nairobi. Business Daily has since pulled down his profile from its website.

Mutuku was sharp in class. Mutuku attended Kathiani High School where he scored an A, and later joined Nairobi University to pursue a bachelor’s degree in information systems, where he graduated in 2012. “I know how to code in most languages. Java, C++, Web languages like Php,” he told Business Daily.

He is clearly a guy who had everything going for him, financially speaking that is, for someone his age. He could tour different countries at the slightest craving, according to his posts on social media, which are often accompanied by pictorial or video evidence. One of his arrogant quotes is: “Tumia pesa ikuzoee (Spend your money, you will attract more)”

By posting his bragging comments as well as travels abroad, Mutuku was indvertently digging his own grave as, having been accused of h*****g before, he was on the radar of  cybercrime investigators, who monitored most of his activities.

Mutuku posted photos showing him touring India, Zanzibar, Burundi, Rwanda, Kampala, Tanzania, among other countries. He often claimed water shortages in Nairobi would force him to go for vacation in foreign countries. On February 2, he made a Facebook post while departing Jomo Kenyatta International Airport (JKIA), saying: “See you next week, Nairobi. Tired of water rationing.”

A week after returning, Mutuku left again via JKIA, this time round to an undisclosed destination. He said: “Once again… See you not soon, Nairobi. This is one trip I have been looking forward to. Super excited!” It later emerged that Mutuku had flown to India.

He was shocked to return to the capital Nairobi, only to find that water rationing had not yet ended. He said: “Ati there is still water rationing? My, my, my! Make me understand. Is it Nairobi Water Company workers on strike?”

The water problem in Nairobi had on January 23 ‘pushed’ him to tour Zanzibar and Tanzania.

“I cannot honestly say Zanzibar is a wrap because you need a whole two weeks or more to visit every place here. Sadly, I have to leave. This was the most amazing place I have ever visited.

Updating a Facebook status nearly two days later, while on transit, he said: “Tanzania, it is a wrap. Awesome country. Friendly people. No water rationing. Next, Lusaka.”

Turns out what Mutuku fashioned to look like holiday trips by a moneyed young man may have been cover-ups for monitoring his h*****g networks and touching base with accomplices, if police investigations are anything to go by.

When Kenyans were crying over the hard-financial difficulties associated with January, nicknamed Njaanuary to signify broke-January, Mutuku was in his own world of unlimited supply. On February 1, when many sighed with relief, he said: “Ati 60 days of Njaanuary? Hiyo ni wewe. Please February just be like Njaanuary. I am so loving 2017. Thank, you God.” 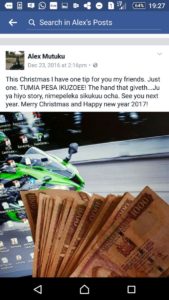 Two weeks later, he traveled to Rwanda followed by Burundi. “Rwanda is a wrap! Kigali was awesome. The view – breathtaking! I have never encountered such disciplined boda boda (operators),” he said before leaving for Burundi.

Three days later, he said: “Last day in Burundi.” Earlier on, he had posted a video in Bujumbura with a caption: “While you are busy sleeping, I am having a night swim in this neon lit pool. Amazing is the world.”

Last year, he attempted to commit s*****e after allegedly his girlfriend cheated on him. In a note published online, Mutuku allegedly revealed that he had been in a six-year relationship with Delvine, and they were even engaged before they broke up in March. He claimed that Delvine cheated on him with four men, even after their engagement in March.

Now b*********s, Mutuku will be on the spot to explain the purpose of these trips and how he made the money financing such a lavish lifestyle.

What’s your take on this article? Scroll down to give your views.