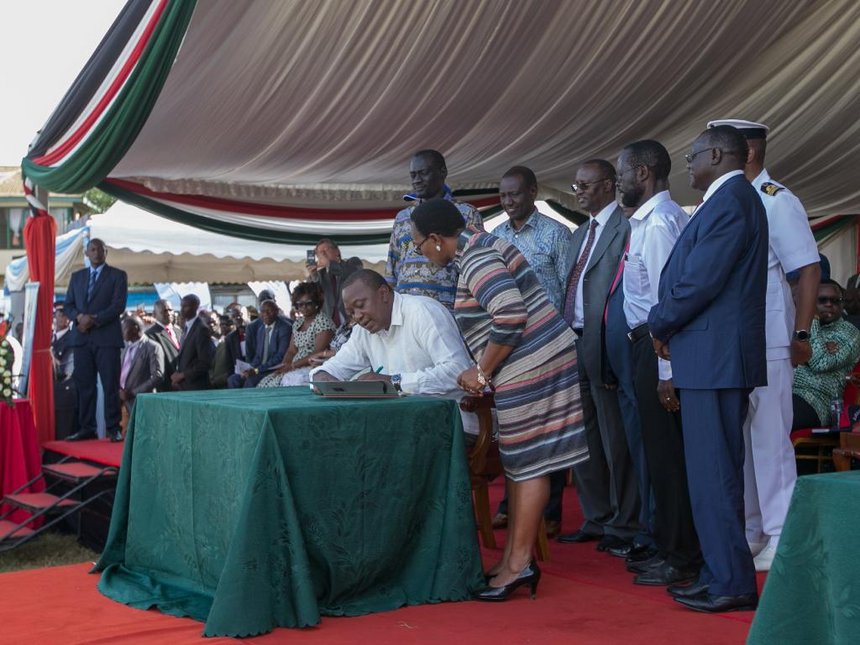 President Uhuru Kenyatta signs the Universal Health Coverage charter during the launch of the programme in Kisumu. Credit: The Star.

[dropcap]L[/dropcap]ast week, while speaking at a Senate leadership meeting in Kiambu County, Senate majority leader Kipchumba Murkomen challenged the national executive to involve the Senate and the public in rallying support for the Big Four Agenda.

He went on to add that the big four agenda risks failure for allegedly being shrouded in secrecy and that majority of the issues tackled in the agenda are devolved functions and will therefore need participation from the senate and the counties.

Indeed, there is a strong case to be made, that for the big four agenda to be fast-tracked, it needs to be opened to more participants and more problem-solvers who can enrich the program with diverse contributions. Perhaps, as a sign of how little the interaction is between Kenyans and the government’s main economic programme, is the constant confusion between the usage of the phrase ‘Big Four’ and ‘Agenda Four’.

The two phrases are frequently and wrongfully interchanged even among the highly educated segments of our society. For those still in confusion, the Big Four Agenda refers to the governments plan to heavily invest in food security, manufacturing, universal healthcare and housing. However, Agenda Four is the fourth part of the National Accord which was brokered after the 2007 post-election violence and which advocated for legal reforms, land reforms, poverty and inequity as well as consolidating national cohesion.

There is certainly some connection between the two phrases, but the context in which they were created remain remarkably different. That said, the big four agenda – in its fullest aspirations could enable Kenya to achieve higher living standards.

Any citizen would be proud to be in a food-secure country, where goods are manufactured locally at competitive prices and where housing and healthcare are within reach of the ordinary Kenyan. Furthermore, the significant public financing that would be pumped into the economy to support big four flagship projects could act as a huge stimulus into the local economy and act as a key lever for growth- the hallmark of Keynesian Economics.

However, that the government is currently going through a tough financing situation, is probably the worst kept secret in Kenya. Several years of borrowing from foreign powers have finally caught up with Kenya and there is very little headroom left to issue more debt.

Furthermore, the heavy wage bill that the country must carry means that there is very little “juice” left for the big four projects. And this could explain why its implementation has been very slow.

Given this state of affairs, it appears that the government needs to approach the big four agenda from a fresh new angle while leveraging innovative thinking.

On the Food Security pillar, for example, research has shown that lack of access to finance is one of the biggest challenges facing agriculture. In fact, only one percent of total bank loans in Kenya are directed towards agriculture.The resulting low cash flow drives farmers to purchase low quality farm inputs, which ultimately leads to a poor harvest.

One potential remedy that the government could employ would be to introduce incentives such as reducing corporate tax rates for banks that increase lending to agriculture.

Similarly, the housing pillar is facing a significant threat from the exceedingly high cost of land which has largely been driven up by speculation as well as illicit proceeds of corruption.

The government needs not get involved in the actual brick and mortar phase of construction which can be done more efficiently by the private sector. Instead, the government should continue sealing the loopholes that have allowed ill-gotten wealth to find its way into the real estate sector, creating artificial bubbles.

Moreover, the historical problem of vast amounts of idle land can easily be cured by modernising outdated land use policies that can easily be implemented by county governments.

The national government will achieve its highest efficiency when it starts to adopt the principle of subsidiarity – that is by limiting itself to initiatives that cannot be done by lower bodies such as the county units or the private sector.

These would include national security, implementing key infrastructure projects, administering justice and passing effective legislation. Such a strategic approach will ensure that the government will not only face a much lower cost of implementation for the big four agenda but will also tap into the creative energies of the counties and the private sector leading to a more vibrant economy.