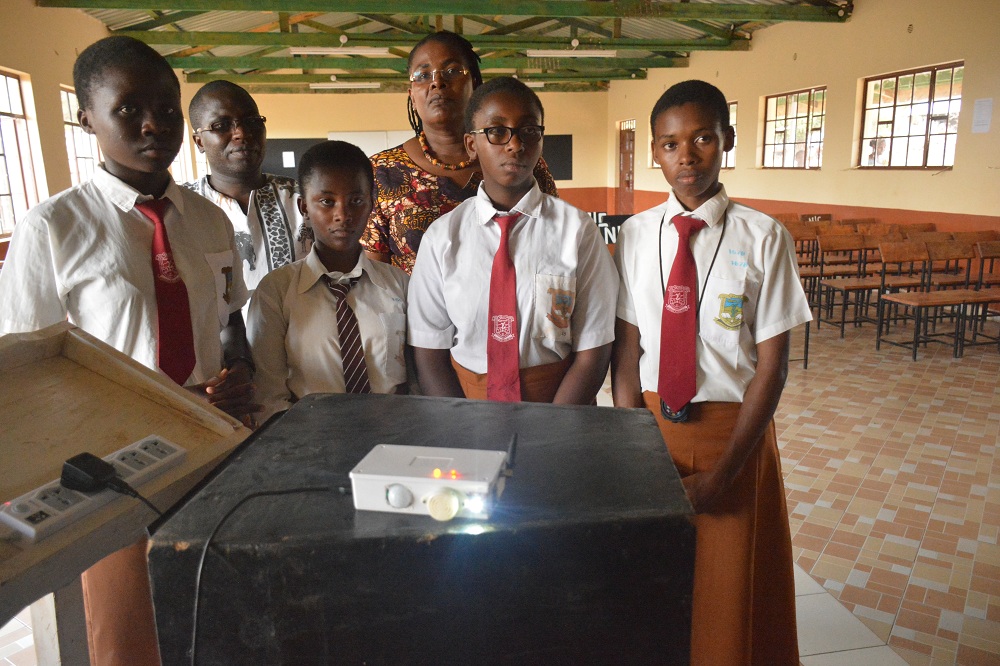 [dropcap]A [/dropcap]little-known school in Taita Taveta County has once again put Kenya on the global innovation map after four of its students invented a gadget that helps track elephants as part of efforts to reduce human-wildlife conflict.

The students of Kajire Girls High School, which lies at the foot of Sagalla hill, pioneered a solar powered sensor, named Ndovu Care, which generates mobile alerts and alarms to Kenya Wildlife Service (KWS) rangers and villagers, thus ensuring real time response before elephants cause havoc in a particular area.

The gadget, which is an integration of motion sensors and GSM minimises the human-elephant conflict in wildlife conservation regions especially in Sagalla location, which is one of the areas most affected by the perennial menace.

The area has experienced disruption of two burial ceremonies in the recent past due to human-wildlife conflict, not forgetting the latest case of a woman who collapsed and died on the spot after seeing a big herd of jumbos surround her homestead.

The students behind the unique discovery are now set to represent the country in a global challenge at University of Delaware in the US come April this year after they emerged the best overall nationally in the recent Diamond Africa competition held in Elgeyo Marakwet County.

The competition, run by Startup Africa essentially connects mentors and builds skills especially for the students, youth and women besides spurring the entrepreneurship engagements.

The school enrolled for the September 2017 edition and impressively made it through a list of 90 submissions nationally to emerge the top at the Diamond challenge for high school entrepreneurs and innovators finals held at Maria Soti Girls High School.

Led by Sandra Lukindo, who is referred to as “the founder,” the team had many a time featured in various trade forums held annually by the Sote ICT Hub, a platform through which they have undoubtedly mastered the art of idea generation, pitching and general presentation, among other skills.

The other three are Joyce Mtoto, who deals with marketing, Anastacia Wairimu (technical) and Macrina Antonia (researcher). They all work under the able guidance of their teacher Ezra Abuga.

Asked why they came up with the idea, Lukindo lamented that instead of conservation being joyful, it has turned into a pain and misery for most of the families especially those bordering Tsavo National Park.

“Every day we face challenges of elephant conflicts, losing families and properties, we come to school late and/or not at all thus affecting our school performance because of the marauding jumbos, therefore we had to come up with something that would assist us once and for all hence our “Ndovu Care” gadget,” said the student.

“We therefore want the community, elephants and the country at large to have an everlasting bond that would ensure that the animals remained in their habitat, while the community enjoyed the results of their sweat and Kenya earned taxes through tourism,” said Lukindo.

She noted that the region is one of the epicenters of conflict between human beings and wildlife especially the elephants that have been invading people’s settlement, killing people and destroying property besides disrupting learning and promoting poverty.

[dropcap]R[/dropcap]egarding how the Ndovu Care gadget works, the student explained that the gadget had a red light which shows the gadget is charged, while the sensor indicates the presence of the elephant which sets a siren which alerts both the community and the KWS officials that the animal is around, hence people remain indoors, while wildlife officials swing into action immediately they get an SMS on their phones.

Lukindo expressed her excitement on winning in the competition, while attributing the success to dedication from her team members and great support from the teachers and school administration.

Wairimu complimented the founder saying traditional methods like lighting fire, use of bees and beating drums used by the local community to drive away the jumbos at night had not been effective.

“As such we came together and came up with this machine that would replace what community thought would guard them against the big five,” said the form two student.

She explained that the Ndovu Care gadget would be placed at a strategic point where the elephants frequent so that once they are detected they could be driven back to their habitat.

“The goodness of this gadget is that it can sense a jumbo as far as 10 kilometres away,” said Wairimu.

Giving the statistics of the human- wildlife conflict, Antonia observed last year about 200 jumbos were killed either by residents and/or the poachers.

“Last December, two game rangers were killed by these elephants but now this will be a thing of the past. The jumbos will remain in their habitat while Wananchi would stay in their homes not to mention that our country would continue enjoying proceeds from our visitors coming to the parks,” he said.

Mtoto, who is in Form Four, was happy that their Ndovu Care innovation would do a good job in tracking the troublesome animals hence resolve human-wildlife conflict.

“We intend to sell our gadget at Sh60, 000 per piece and two NGOs – Wildlife Works and Beehive Company – have shown interest,” said the excited marketer.

“We are proud that this is our second innovation after coming up with bee repellent product which keeps bees away from people who live next to forests,” said Mtoto.

Printing and branding of T-shirts is another way the students get their funds.

An elated Phidilia Kilimo, the school’s principal, said the girls had raised the status of the school both nationally and globally.

“The project has built the name of the school that girls from a remote school can come up with such project. It has opened the school to other people to come and learn from the student’s innovation and entrepreneurship skills,” said Kilimo.

“I am happy that children would no longer come to school late not to mention that the parents on their part would also ensure that school fees was paid on time as the jumbos would not destroy their crops,” said the principal of the school with 371 students.

She said following the introduction of the sensor gadgets, the community and the elephants were now living in harmony.

Their teacher, who is also the school’s ICT patron, observed that journey to fame for the girls and school had just began.

“We are proud to be declared the winners of the competition which had attracted more than 90 schools. We shall do our best as ambassadors of the school and Kenya at large during our big task that awaits us in the US,” noted Abuga.

On the other hand, KWS Spokesman Paul Gatitu promised the girls that the government was ready to support the development of Ndovu Care.

“The innovation will at the end of the day assist the government in several ways. Tourism proceeds would go up and people would live in peace with the jumbos,” he pointed out.

Gatitu said they would send a team of senior KWS officials to the school to see how best the conservation body can come in to develop the initiative that is coming from the youth.

ALSO SEE: From Tuk Tuk ambulances, a new lease of life for mothers

David Ogiga, who is the director of Sote ICT and Sote Hub, said his organisation had invested heavily in local schools for business innovation and enterprenual skills among students and teachers.

Ogiga said the project funded by Slovak government since 2010 has enhanced technical jobs and business skills of students and growing startups at the early stage.

“Our project gives them the same opportunities often unavailable due to remote location. What a joy to see this paying off,” said the director.

He revealed that Sote project combined ICT integration and business training skills for 12 schools in the region reaching out to over 6,000 students, who once they leave school, can start income generating activities or receive further career training at the Sote Hubs.