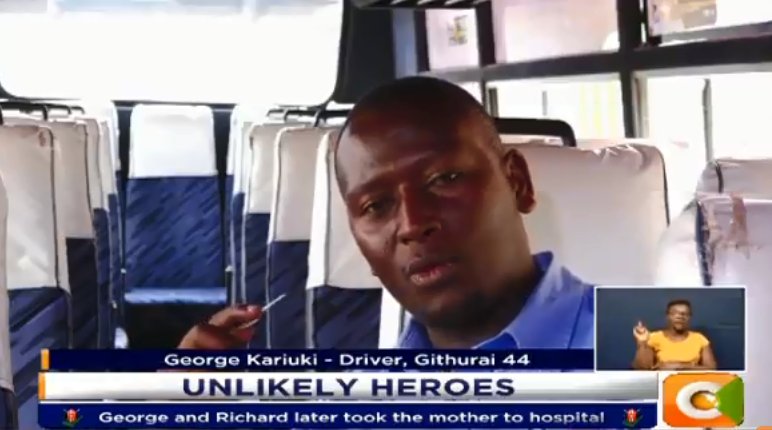 [dropcap]G[/dropcap]eorge Kariuki, a matatu driver on the Githurai route in Nairobi, has turned into an unlikely hero after helping a woman deliver herself of a baby in his vehicle. Together with his conductor, Richard, they brought a new life to the world in the most unusual circumstances.

The pair was transporting passengers on the Githurai 44 route as usual, on April 6th when something strange happened: a pregnant lady on board went into labour.

“After collecting fares, the conductor came and told me that one of the passengers looked s**k and she wants to alight near Neema Hospital,” Kariuki, who would later help the woman give birth, narrated. “I told him to ask her whether she could wait a little bit for us to drop the passengers then rush her to hospital.”

It was raining heavily and they could not drop her at Alsops. So they decided to drive her to Neema Hospital near Kasarani Stadium on their return journey.

But when they approached Rosters stage near Safari Park Hotel, Philomena Mbithi’s water broke, a signal that the baby was just moments away. As Richard tried to get help from women at Roysambu, George kept watch over Philomena.

Things moved very fast and there were very few options for the two men. “When I turned around I saw the baby’s head. I was scared but God gave me strength…  I stretched out my hands and held the baby which was almost falling down,” said Kariuki.

What could have been a tragic situation ended up in joy: the woman delivered her baby boy at the entrance of the bus, just outside the hospital. “The u************d was cut in the bus and the placenta removed before the nurses moved me into the ward,” said Philemon.

The baby was aptly named Raymond Kyalo, meaning he was born while his mother was travelling.

George and Richard have been lauded as heroes the compassionate act from an industry known for many ills including physical and s****l a*****t on passengers.

To reward their bravery, a local tour company has offered an all-expenses paid three day trip to Diani together with their spouses, where they will stay at a 4-star hotel and enjoy life away from the chaotic picking and dropping of passengers.

“Finally they are boarding for the first time EVER ✈✈,” Bonfire Adventures and Events wrote on its Facebook page. “The heroes, Mr George and his Conductor Richard, after their noble act of assisting a passenger Philomena Mbithi who went into labor in the bus deliver a baby.”

Bonfire said they are true heroes whose act of kindness and bravery represents “the best of human virtues.”

This rekindled memories of July 2010 when a Kenya Airways in-flight crew delivered a baby girl on board a plane that had just landed at the JKIA last week. A well trained Kenya Airways in-flight crew delivered the baby girl just after arrival from Dubai via Muscat. The crew were cheered by passengers after they successfully ‘midwifed’ the delivery.The crew put the woman on the aisle in economy class while others held up a blanket to create a makeshift delivery room. Flight attendants were assisted by KQ n***e Juliana Maithya.

NEXT: It’s too much! Newly elected Governor finds it hard to serve residents