On 12th August 2020, a screenshot of a tweet bearing the account name of Deputy President William Ruto was shared through WhatsApp. In the tweet, Ruto congratulates Azimio La Umoja presidential candidate, Raila Odinga, for winning the election. 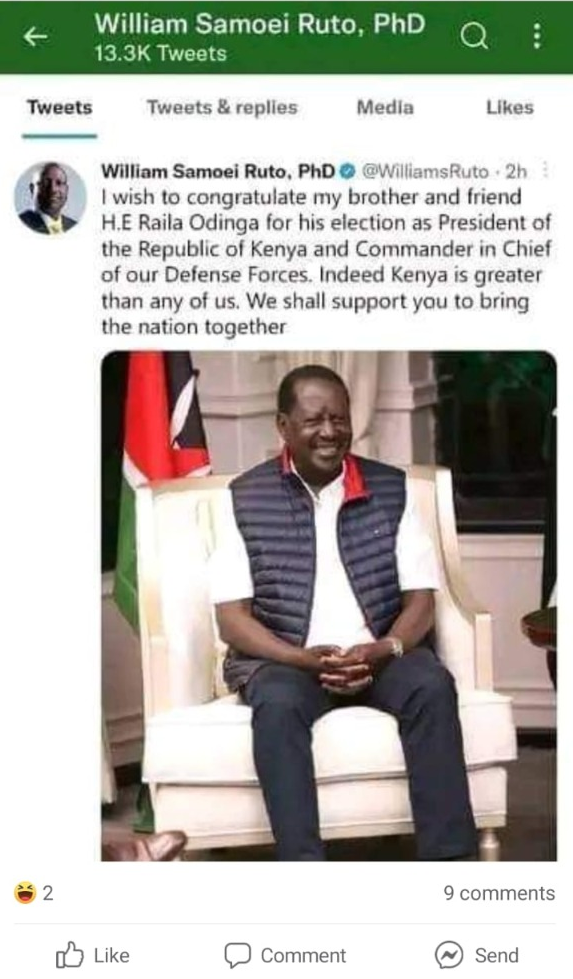 “I wish to congratulate my brother and friend H.E. Raila Odinga for his election as President of the Republic of Kenya and Commander in chief of our defence forces. Indeed Kenya is greater than any of us. We shall support you to bring the nation together,” reads the tweet accompanied by a photo of Raila Odinga.

A fact-check on the tweet established that it was not released by the Deputy President. In any case, the presidential election results are yet to be announced.

We reached out to the DP’s digital communications strategist Dennis Itumbi who dismissed the tweet as fake. “Let me not help a falling tree from landing, it will fall anyway. No further comment about these endless fakes,” he said in response to inquiries about the screenshot of the tweet.

The DP’s communications director, Hussein Mohamed also disowned the tweet, dismissing it as a “piece or propaganda.”

A review of Ruto’s social media accounts yielded no such post. The most recent posts on his Twitter account were shared after he voted on 9th August and when he met the AU-COMESA Election Observer Mission, who paid a courtesy call on him a day after the voting.

DP Ruto contested the presidency on a United Democratic Alliance (UDA) party ticket, while Raila Odinga did so through the Azimio La Umoja One Kenya coalition. The two were engaged in a neck-to-neck contest, according to earlier tallying by media houses. The verification of votes is still ongoing and IEBC chairman Mr Wafula Chebukati, who is also the presidential elections returning officer, will announce the winner once the exercise is concluded.

The screenshot of a tweet in which DP William Ruto purports to congratulate his rival Raila Odinga is therefore fake.