A press statement dated 10th August circulating in WhatsApp forums and containing the Ministry of Educátion logo, indicating that the government has postponed the reopening of schools to 22nd August 2022 is altered.

The document says: “On 1st August, I ordered the early closure of all basic Educátion Institutions to allow for adequate preparations and conduct of the General Elections. We indicated that reopening would be on 11th of August.

“We have, however, been informed that the process of tallying of ballots may still be ongoing on the aforementioned date. Therefore, following further consultations, I hereby convey the government’s decision that basic educátion institutions will reopen from Monday, 22 August, 2022.”

The statement was picked by some Facebook users as seen here.

A fact-check on the statement established that the Ministry of Educátion did not announce schools will reopen on 22nd August as claimed. BusinessToday talked to the senior communications officer at the Ministry, Mr Kennedy Buhere, who dismissed the statement as fake.

A closer look at the document reveals it is an altered version of a statement issued by the Ministry of Educátion on 10th August. The legitimate statement had pushed the reopening of schools to 15th August 2022, but this has been edited to read 22nd. The other details, including the date of release, are the same. 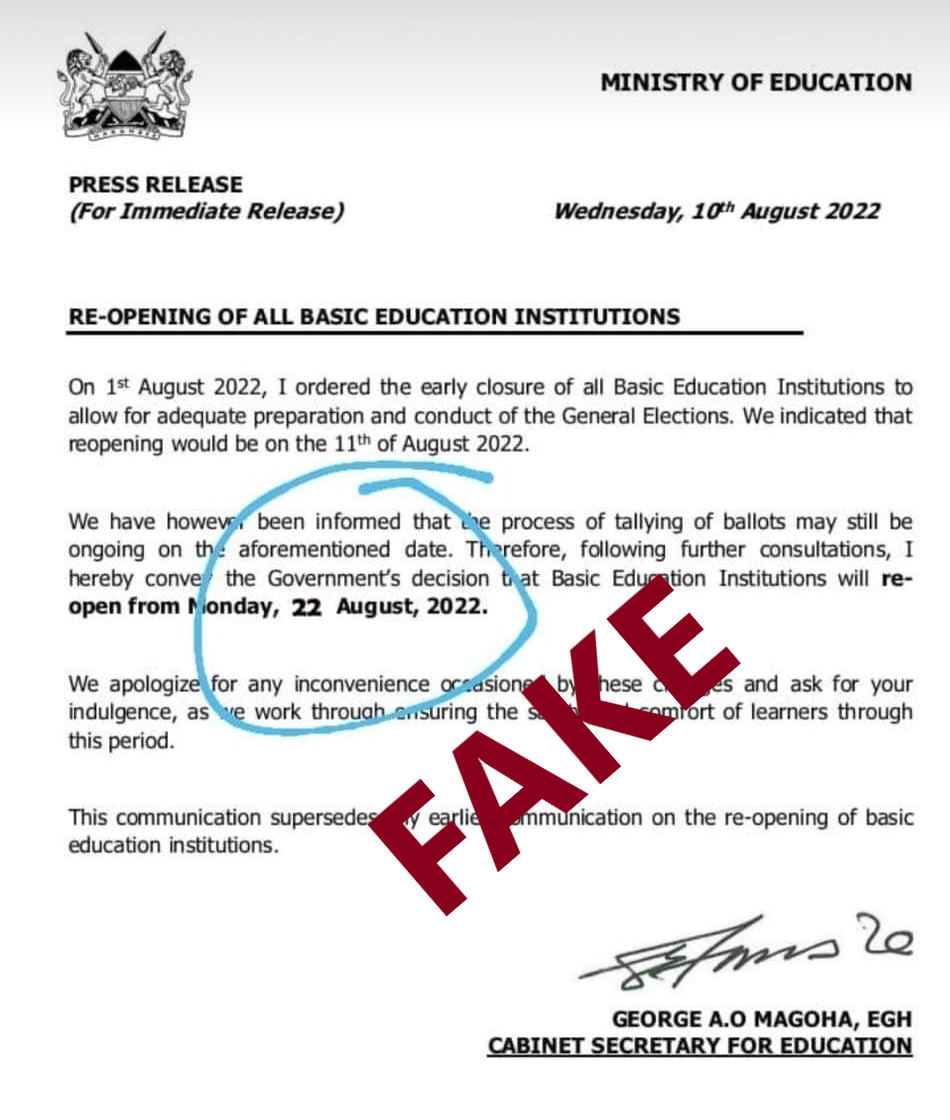 A review of the Ministry of Educátion’s Twitter handle shows it has announced the new date for reopening of schools as 18th August 2022. “… following further consultations, I hereby convey the Government’s decision on the suspension of the reopening of ALL Basic Educátion institutions with effect from Monday, 15th August, 2022 until Thursday 18th August, 2022,” reads the statement from the Ministry signed by Cabinet Secretary Prof George Magoha and released today, 13th August 2022.

Schools were suddenly closed on August 2 following a directive from Cabinet Secretary Prof. George Magoha to allow the Independent Electoral and Boundaries Commission (IEBC) to conduct smooth elections. Schools were initially scheduled to reopen on Monday, 11th August, but that has since been moved to the 18th to allow for the conclusion of elections.