The late Safaricom CEO Bob Collymore was the most googled personality in July, Google has revealed in it’s Kenya results for the month.

Collymore, a Guyanese-born British businessman succumbed to cancer on the July 1, 2019 bringing his nine year stay at Kenya’s most profitable corporate to an end.

His death came almost a year after he openly spoke out about his illness, he died of acute myeloid leukemia and left behind his wife Wambui Kamiru and four children.

The death of Kibra MP Ken Okoth was the third most googled item during the month.

Okoth died at The Nairobi Hospital after a long battle with colon cancer. The MP was receiving treatment in Paris and returned home two weeks before his demise.

Former KTN news anchor Esther Arunga was the fourth trending item after she was sentenced to 10months jail probation in a case involving the death of her son.

Arunga is said to have lied about the circumstances under which her son suffered fatal injuries at a family home where she lived with her husband, Quincy Timberlake, in Brisbane, Australia, in June 2014.

The fifth trending item during the month was the FaceApp application. FaceApp is a free app on both the Google Play Store and the Apple App Store with an age filter that makes people in photos look much older.

Socialite Vera Sidika was the sixth trending item during the month.

Vera who has been very vocal about using skin lightening products shocked Kenyans after she posted a picture of herself moments after bleaching her skin for the third time.

The seventh trending search was Cancer. This is after several prominent people in Kenya succumbed to the disease, which has now become the third leading cause of death in Kenya.

Kirinyaga governor, Anne Waiguru tied the knot to city lawyer Kamotho Waiganjo and her wedding was the eighth trending search in July.

The pair met 10 years ago in a ferry in Likoni, Mombasa County and decided to tie the knot in a lavish traditional wedding ceremony at Kiamugumo Primary School that President Uhuru Kenyatta attended.

Sodium Metabisulfite was the ninth trending search for the month. This was after Red Alert, an expose by NTV investigative editor Dennis Okari exposed how supermarkets blatantly use the chemical to lengthen the shelf life of meat products to avoid losses.

The Africa Cup of Nations (AFCON), the continental football tournament which concluded in July after Algeria won the cup was the tenth most googled item. The final between Algeria and Senegal in particular made the tournament the tenth most search item on the search engine.

In the ‘How to’ category, the top query was How to make money online – followed by How to write a CV and How to write an application letter, queries that show Kenyans are interested in improving their employment and financial abilities. 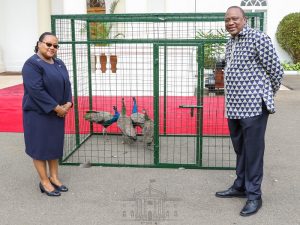