The ornamental birds were delivered to the Head of State by Tanzania High Commissioner to Kenya Dr Pindi Hazara Chana who also delivered a goodwill message from President Magufuli. The birds were gifted to President Kenyatta by his host during his recent private visit to Tanzania in what President Mugufuli termed as a sign of deep respect and appreciation for the Kenyan leader.

Speaking while receiving the four birds, the President expressed his deep gratitude and appreciation to President Mugufuli saying the birds signify the values of love, unity and brotherhood that exist between the people of the two countries.

“On my own behalf and on behalf of the people of Kenya, I receive this special gift. This is in the spirit of brotherhood and friendship of the East African residents,” the President said.

“It’s a great honour not only between us as Presidents but as the people of East Africa. This deep relationship and brotherhood should continue so as to benefit our current and future generations,” he added.

The President said Kenya doesn’t just take Tanzania as a neighbour but rather as a sister republic with a shared aspiration of a prosperous region.

“Aided by the unity that exist between our two nations, we will fight with what is negatively affecting our people and any other challenge which might rise until we build a strong and cohesive brotherhood that will enable our people in Tanzania, Uganda, Kenya, Rwanda and Burundi to be referred to as East Africans,” the President emphasized. He assured the Tanzanian delegation led by Dr Chana that Kenya will ensure the four peacocks will be given great care to ensure that the pride grows.

Dr Chana commended President Kenyatta for his astute leadership adding that in her country, the peacocks, which arrived in the country yesterday, signify love, honour and cherished friendship.

Others were the Kenyan High Commissioner to Tanzania Dan Kazungu and the Tanzanian Defence Attache to Kenya Col Fabian Machemba. 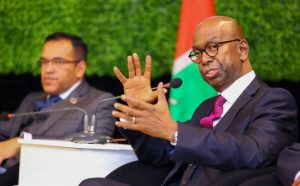