According to various blogs, Kamene Goro and Andrew Kibe, are set to leave the Kevin Mulei-owned station to take over the Kiss 100 morning show following last week’s departure of the equally popular Adelle Onyango. One report indicated they are set to leave this Friday.

Mulei, the Founder of M0Sound, an event planning, production, and management company based in Kenya with operations across East and Central Africa, founded NRG (Energy) Radio last year and it has since witnessed commendable growth.

Crowned the radio digital king in town in April this year –  given their leading social media numbers, visual and engaging content, their growth has shaken the market with their multi-platform radio model being an admiration of many.

It is the first visual radio station in Kenya and Africa and has become a key benchmark for most media houses across the region.

However, the loss of Kamene and Kibe, who co-host the lively NRG breakfast show alongside DJ Kace, is likely to hit the station hard barely a month after it introduced FunX and Choice Radio to widen its audience reach. 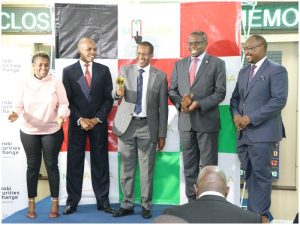 M-Akiba investors now total over 505,000
The closing bell at the Nairobi Securities Exchange (NSE) was…