The sassy Weekend with Betty presenter Betty Kyalo. Was the latest mass firing at Mediamax a jolt for her to start thinking of her exit strategy? [Photo/Betty Kyalo]

October has been a very long month for Mediamax employees especially with the news that most of them faced the sack at month-end.

With the air of uncertainty, most of the employees were teetering through the mostly wet month not knowing what would come of their contracts.

But in the midst of all this, the bubbly and sassy Weekend with Betty presenter, Betty Kyalo, is still with the company that unveiled her in a glamorous style – and she can sit pretty knowing that she will still hit the K24 screens this weekend!

Well, she is a survivor.

Betty was hit by a Matatu when she was in form three in 2005. She underwent 7 surgeries and form that experience, she calls herself ‘miracle Betty’.

“My whole left side of my face is scraped off including my neck so this part healed after a year…” she says.

But this is a story for another day.

Lessons for Betty from the K24 Massacre

However, the question that remains now is how comfortable Betty will be at DSM Place having seen many of her colleagues shown the door.

For starters, Mediamax shows that it is in the game of use-and-dump having done the same to other journalists before the recent mass layoff.

Among those who suffered at the hands of Mediamax include Tom Mboya, Belinda Obura, Anne Ngugi, Beatrice Marshall, Louis Otieno and many others who were cut off when their careers were at their prime.

Was the latest event a jolt for Betty to start thinking of her exit strategy?

For someone like Betty, options are available and her employer may have retained her on renegotiated terms or until a suitable replacement for the Weekend with Betty slot is found.

While it is not clear what the stay-the-course deal is, Betty is among the highest-paid K24 employees. This is evident in Editorial Director Peter Opondo’s response “good money” when asked how much the presenter was earning.

The latest firing may not be a big deal for Betty but it certainly is an eye-opener for her and anyone interested in working at DSM place.

Despite all the negativity that has come with the firing of 160 employees by K24 parent company Mediamax, it is good news that Betty, who has a massive following online, still has the slot reserved for her. In 2018, Kenyans on Twitter (KOT) voted Betty the Journalist of the Year.

To show appreciation, she took to her Instagram page to celebrate.

“We won again! Thank you to all my people on Twitter who voted for me as Journalist Of the Year. Much gratitude to all of you beloved! And of course much respect to all the other worthy contenders Timothy Otieno, Oliver Mathenge and digital journalist Marvin Gakunyi. I salute you. Thanks Twitter!”

The news came on the day she also featured on the front page of the January edition of Parents Magazine alongside her daughter Ivanna.

Away from the screen, Betty runs her own salon, Flair by Betty, which she launched after falling out with Susan Kaitanny, with whom they jointly owned the upmarket Posh Palace salon.

Her accomplishments on and off-screen are many and her easy persona makes Betty affable to those who come across her.

In Kenya’s media industry, history will judge Mediamax harshly for all the ruined careers and livelihoods that have been messed.

This is especially so since the entity is majorly owned by the first and second citizens of this country – President Uhuru Kenyatta and his deputy William Ruto.

On October 31, Mediamax called the 160 workers earmarked for sacking for a meeting at a Nairobi hotel.

To help the employees deal with the job loss reality, the Mediamax management had also invited counsellors and financial experts to guide those affected. Insiders at Mediamax said that the counselling session should have come earlier and not at the exit point.

The lay-off mainly focused on radio and TV with the company seeking to reduce operational costs.

After the sacking, the station was left in the hands of Eric Njoka and a number of reporters with the company expected to reorganize the team.

For Betty, the question remains if she will take it all in her stride or that she has learned that in media, just like in politics, there are no permanent friends and foes. 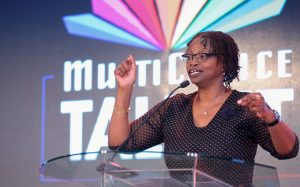