Former Royal Media Services editorial consultant Peter Opondo has formally been appointed as the Group Editor-in-Chief at Mediamax Network Ltd. The official return of the former Group Managing Editor at the media house associated with President Uhuru Kenyatta’s family and his Deputy William Ruto was announced by CEO Ian Fernandes in a memo to staff on Wednesday.

“The Board of Directors and Management of Mediamax Network Limited is pleased to announce the appointment of Mr Peter Opondo as the Group Editor-in-Chief. Peter served in a similar capacity at Mediamax from 2013 to 2015 and we are glad to welcome him back,” he said.

“We look forward to you all according Peter the necessary support as we continue to expand and improve the news, editorial and current affairs products offered across our print, television, radio and digital brands,” the memo added.

Insiders say there is anxiety and tension at DMS Place amid reports indicate Opondo is to do away with the Wikendi edition, undertake staff restructuring and has a free hand from President Uhuru.

Ruto has also been a quiet shareholder at Mediamax only sparingly making visits there but reliable sources indicate he has enhanced his stake to 50% making him the majority shareholder and key decision maker.

According to Business Today sources, Opondo has been tasked with turning around the company, which owns K24 TV, Kameme TV, PD newspaper and a host of radio stations, into a profitable business venture, adding investors were getting worried it was transforming into a political machine.

“We hear content will be key. He has been asked to restructure the business to a level where it can rival its competitors and deliver profits to investors.

The Wikendi edition which is currently entertainment oriented will be done away with and replaced by a proper weekend newspaper but he will have to decide whether it would remain the way it is or go the hard news, especially politics, way. The way it is, it is consuming a lot of revenue without attracting ads,” said one source familiar with developments around his appointment.

Another source said one of his missions will be to break down cartels at Mediamax and a forensic audit is likely to be initiated following reports of ghost workers,  payments for fake assignments and wasteful stipend payments for trips, among others. 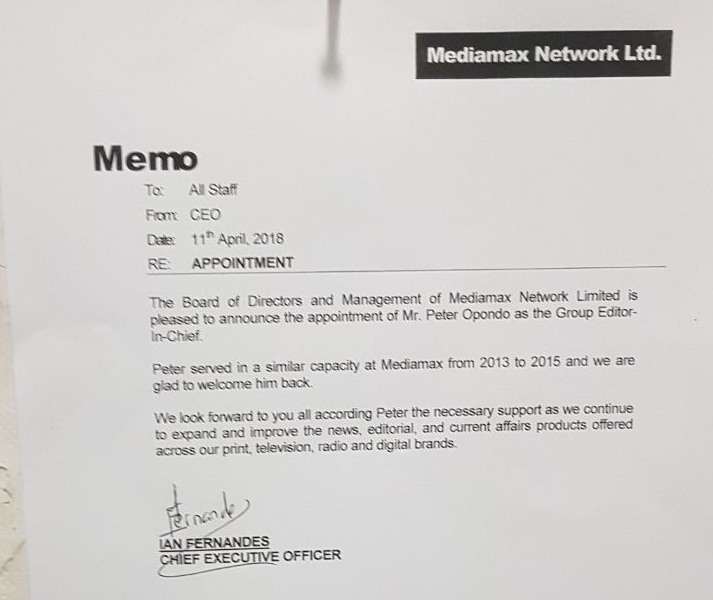