A Halcyon™ radiotherapy system at Nairobi West Hospital. In Kenya, the health system has proven to be discriminatory against the poor. [Photo/ Business Today]

Cancer is one of the leading killer diseases in Kenya hitting both the rich and the poor with no discrimination.

The disease has affected many people not just in Kenya but in the world at large. However, different levels of technologies in different countries has created a difference in how the disease is fought. People from various regions have questioned their governments’ preparedness in tackling the killer disease.

In Kenya, the case is no different. However, in comparison with other African countries, Kenya is ahead in terms of technology used to fight cancer. This is after Nairobi West Hospital invested in the Halcyon™ radiotherapy system.

The radiotherapy equipment is considered the best in the country and in Western, Central, and Eastern Africa. The hospital invested in this machine when it was opening its cancer centre in March 2019.

According to Ajith Kumar, a Radiation Therapist at the hospital, this machine poses less risk to the patient than any other machine in the region. He said that with the Halycon machine, the patient is exposed through radiation for the shortest time possible.

Radiation exposure can cause acute health effects such as skin burns and acute radiation syndrome (commonly referred to as “radiation sickness”).

“The machine can treat every type of cancer that needs radiation. The biggest advantage is that there is less treatment time so the patient won’t be exposed to radiation for long. Within less than two minutes the patient would have finished the session,” Kumar remarked.

Apart from that, the machine also features a streamlined workflow that only requires nine steps from the start to the end of treatment compared to up to more than 30 steps with older technologies. This reduces time and also margin for error.

According to Kumar, it is easier for a patient to get wrong treatment which was meant for another patient. This is more likely to happen when the process from start to end of treatment consists of many steps and is not digitalised.

The machine, which resembles MRI scanners takes just half an hour to power up and uses image guidance to target tumours. This means that the patient will only receive treatment at the cancerous area of the body and nowhere else.

For example, when a patient is treated for cervical cancer no other organ is radiated owing to the modified intensity of the therapy.

As it seems, private hospitals in the country are on the forefront in the fight against cancer. The Aga Khan hospital also recently invested in a Positron Emission Tomography (PET) scan equipment, the only one of its kind in the region. However, Aga Khan’s machine is mostly used for treatment.

Most patients have been depending on Kenyatta National Hospital for radiotherapy sessions which has led to long queues and some patients get booked months after diagnosis. Most cancer patients have complained about this with the government promising more machines but yet to deliver.

World Health Organisation’s International Agency for Research on Cancer (IARC) in 2018 said that 47,887 Kenyans get cancer every year and 32,987 die from the disease.

The most common is breast cancer with 5,985 women diagnosed every year, compared to 2,864 prostate cases in men. The report further showed that oesophagus cancer has become the top killer in Kenya, claiming 4,354 lives every year and overtaking prostrate, stomach, cervix and breast cancer fatalities.

Globally, most people die from lung cancer, which is linked to smoking, followed by colorectal, liver and breast types. 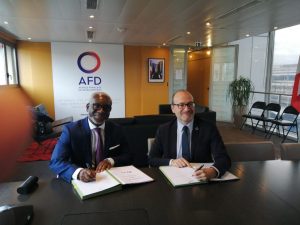