Nairobi Governor Mike Sonko. He has exempted new businesses from paying for permits in Nairobi. [Photo/courtesy]

Nairobi Governor Mike ‘Sonko’ Mbuvi has rejected Philip Chepsat’s request to be made Deputy Governor on grounds that he is not a woman.

Taking to his official social media accounts, Sonko acknowledged receiving the expression of interest from the Nairobi resident but maintained that the next Deputy Governor of Nairobi County should be a woman.

“It is worth of note that as a politician, I believe in keeping my promises to the electorate. And earlier, I committed myself to Nairobians that my nominee for Nairobi City County’s Next Deputy Governor shall be a woman,” wrote Governor Sonko on his Facebook page.

“Too bad you are not a woman because I intend to keep that promise to my women supporters at all costs because I believe in not only upholding the third gender rule but exceeding it. This is why half of Nairobi County executive members are women,” explained Sonko.

Sonko further noted that he will be ready to fill the Deputy Governor position once the legislation pending in Parliament on nomination and appointment of Deputy Governor is assented into law.

However, the Governor urged Chepsat not to give up in his quest on leadership in Nairobi County and keep on checking and applying when vacancies are announced.

“I shall soon be sending home several nonperforming Members of County Executive Committee and Chief Officers who are sleeping on the job and you should be on the standby to apply when the County Public Service Board advertises to fill the position,” said Mr Sonko.

Mr Chepsat shocked Kenyans on Wednesday after placing an advert in the local newspaper expressing his interest in the deputy governor seat which has been vacant for close to two years.

In January 2018, Mr Sonko was left without a deputy after Polycarp Igathe his running mate quit four months after being sworn into office. He mentioned lack of trust from the governor as the reason for throwing in the towel.

Igathe joined politics from the private sector, having resigned as a CEO at Vivo Energy, with the intent to restore East Africa’s largest city to its position as the regional economic powerhouse. He later landed a job with Equity Bank as the Managing Director then recently left to go back to his job at Vivo Energy. 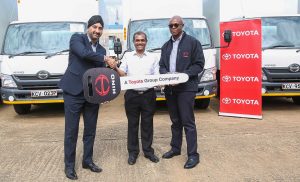