Secondary school students mostly use drugs at home during holidays and while in school. [ Photo: scribol.com]

Research by the National Authority for the Campaign Against Alcohol and Drug Abuse (NACADA) has revealed that increased drug abuse in Kenya, especially among secondary school students.

NACADA says drugs are mainly used by students during school holidays at 49.5%, on their way home at 35.1%, within school environments on weekends at 30.4% and during inter-school meetings at 27. 8%.

The study targeted a sample of 3,850 students which was rounded off to 4,000. It recorded a non-response rate of 4%, with a total of 3,908 students being interviewed.

In a speech read on his behalf by Deputy Head of Public Service Wanyama Musiambo during the launch of the African Journal of Alcohol report by NACADA, Interior CS Fred Matiang’i confirmed that drug abuse is a threat to the youth today and vowed not to relent in the war on substance abuse.

The Interior CS commended the move by NACADA to focus on prevention measures through Africa Journal for Alcohol and Drug Abuse (AJADA) and noted that evidence-based preventions will boost informed decisions among people.

“We won’t lose the war against drugs for the sake of future generations,” Dr Matiang’i said.

NACADA board chairman Julius Githiri, reiterated that NACADA’s role is to give facts on drugs and make sure the country is well informed through statistics and research. “As a board,” Mr Githiri said, “we are excited that the journal has been widely accepted and we (NACADA) have partnered with other stakeholders to make the public aware of what is going on.” 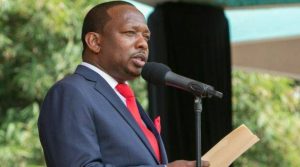