Despite leading brands investing heavily in advertising through social media influencers, more than 80% of Kenyans believe that does not impact their decisions to acquire products or services.

According to a report authored by Odipo Dev,  a Nairobi based information, technology and services firm, more than three quarters of the Kenyan population trusts traditional media and friends as more reliable sources of information about products and services while they hugely mistrust influencers who they believe advocate for brands they benefit from.

The research published in February 2019 states that this distrust has been largely brought about by the influencers themselves.

At the time, 82% of Kenyans believed influencers did not sway their decision making when buying products and services.

“As more brands ventured into influencer marketing, many influencers bartered their credibility for advertising dollars. This has led to influencers endorsing too many brands even some that are in direct competition or recommending products they’ve never actually tried nor use in their daily lives,” reads the report “The data shows that consumers have since picked up on this trend and have returned to directly evaluating brands for themselves or relying on close friends they can trust,”

Majority of the respondents questioned in the survey said that they follow influencers on social media for entertainment.

Data collected by the firm shows that musicians, socialites, politicians, bloggers and public intellectuals are the most followed individuals by Kenyans. 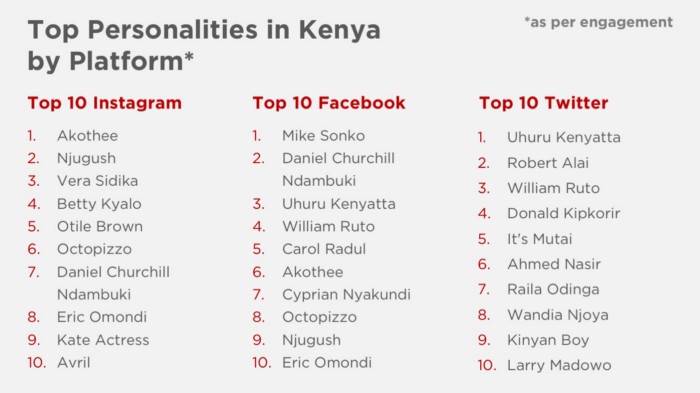 “Our data shows that the majority of Kenyans do not perceive influencers as experts in their respective areas. This may be largely affected by the tendency of many influencers posting content that cuts across many topics; thus not clearly positioning themselves with audiences.” further reads the report.

According to Odipo Dev, this dilution of authority renders the influencers as risky investment since they don’t cultivate enough trust with the audience.

The report will lead to questions on whether corporates and mid-sized companies have been spending their money well by enlisting the services of influencers and whether they get value from it.

In an updated version of the same report published in February 2020 , 80% of Kenyans still did not trust influencers to recommend brands.

“When surveyed about their most trusted source of information/recommendations for products, close friends came out on top, followed by brands and then influencers. Friends are perceived to be more authentic reviewers of products with little incentive to give you false information,” read the updated report.

“However, it is important to note that the level of trust in information heavily depends on context. In last year’s study, we came out strongly about the data showing that audiences do not trust influencers, but as we continue to interact with consumers, we realise that it is more complicated, “further stated the report.

“Whereas the graph may indicate that friends and brands are the most trusted sources of product information, our research shows that purchase environments are much more complex than the graph makes it seem,” it further read.

According to the updated report, there are certain categories especially niche ones such as fitness, food and beauty where influencers, and not the brands or friends, are the most authoritative figure in a lot of cases.

“They simply take precedence in that context. Bearing this in mind, the effect of factors like the type of product, user reviews and traditional media exposure determine to varying extents how consumers perceive influencer endorsements in different categories,” reads the report.

“For instance, we doubt Joy Kendi will have much effect on the sales of cement, while bad consumer reviews will negatively affect her endorsement of Always, but very few question her endorsement of Ciroc. This is why context really matters and in 2020, brand custodians, will have to do a lot more due diligence as they seek to partner with influencers. Influencers will also have to do the same with the brands that approach them so as to keep their integrity intact, adds the report.

The updated version of the report also states that Kenyans follow influencers for entertainment.

“In a similar pattern to 2018, entertainment remains the top reason Kenyans followed influencers in 2019. Laughter was the most sought out form of entertainment as comedians proved to be the most resilient content creators across all platforms. Comedy is now largely a mobile experience, and the majority of audiences now expect it once they log on to social media,” reads the report

The social media algorithms have caught on to this expectation and are highly likely to prioritise funny content on timelines. In addition to comedy, influencers were a big source of entertaining drama in 2019. Most influencers today share highlights of their personal lives on social media and audiences are keenly following the countless scandals, spectacles and triumphs. This type of content has proved to drive engagement and Kenyan influencers are fully leaning into it. The peak of this trend has seen influencers sharing the birth of their children live on social media.

Odipo Dev attributes this to  Facebook’s reach and prevalence in Kenya.

See Also>>>> How to Make Money on Social Media