Valentine’s was fast approaching, a cause to worry. Having four girlfriends – two loyally tucked in the village and the two slay queens in the city – presented great logistical and financial challenges. Such delicate matters require that a man summons his cabinet of wise friends for a crisis meeting.

Normally, it is at this point that Josiah steps in. Unlike other times when he first demands his commission, in such a situation, Josiah asks for a bottle of beer before he can share his wisdom.

As Josiah quietly sipped his beer, Oti and Brio joined the table. Oti prided himself as being a love doctor, but none of his relationships had ever gone beyond two months. His pieces of advice are normally the last resort when hope is fading.

Unfortunately, they took the joke seriously. Atieno was already demanding money for saloon and bus fare to the city in readiness.

Sandra, the first slay queen had already stated that for the Valentine’s, I was taking her to Mombasa. Sandra never requested or suggested. She demanded. And her statements were final.

Carol the last one, whom my heart was most fond of, though calm and undemanding unlike the trio, was always sharply dressed. She only wanted an outing, a beautiful red dress, and the latest Samsung phone. Since I loved Carol the most, I had to ensure that her demands were met. I was, however, not going to touch the Samsung phone nonsense.

The two slay queens guzzled my two installments of HELB loans and much of my pocket money during the last two years in campus. However, as Josiah was fond of quoting, “Slay queens, just like alcohol and cigarettes, are bad, but very hard to quit!” They were addictive and like a bad habit, I found difficult to drop them.

The climax of the entire matter, however, was that I had just met a very beautiful lady, Doris, on Facebook who I had asked to be my Valentine. It was also the first time we were to meet. The few pictures I had seen of her were enough to confuse any man into selling my inheritance and take her to Dubai for a holiday.

The cabinet led by Josiah had listened with the acute keenness of a doctor.

“Eii! Bwana you are competing the biblical Solomon..” Oti exclaimed.

“A Solomon without the wealth and wisdom.” Brio interjected.

We all burst out laughing before Josiah chimed in. “This is indeed a big problem, hii ni tricky bwana. A bottle is not enough, add three.”

They drowned two more bottles before they began. “You must first tame Sandra, she is the most cunning and wild, ” Josiah started.

For your village girlfriends, simply switch off your phone. After Valentine’s, tender a most passionate apology plus explanations of how you nearly lost your life and your phone to robbers while trying to get them Valentine presents,” Oti continued.

Later on, Josiah who was now evidently under the influence of alcohol was talking incoherently and even recanted his earlier statements to help.  “It is against my Christian  morals and my patriotic duty to help a promiscuous  man enhance his promiscuity, noo, I will not help a sinner to sin.”

He then staggered away after drinking away my money which would have come in handy in that precarious situation I had. Brio and Oti were dead drunk to talk.

I was left to handle my ‘sins’ alone.

I visited all loan lending apps and also managed to convince a rich uncle of mine to lend me a few thousands for some school project.

READ ALSO >> Search for White Girlfriends Online Not for the FaintHearted

As earlier suggested by Oti, I switched off one of my lines, eliminating Marystellah and Atieno. I now had to eliminate only one more then calculate on handling two. Sandra was extremely sharp and could not be hoodwinked easily. I could not also dare risk to be the victim of her vengeance. I was only to convince her that the Mombasa trip be postponed but in its place a wonderful dinner out would do .

Doris was out of the elimination question. Carol, being my favourite but who I was always with and could always take a rain-check without grudging, was the obvious casualty of the elimination.  I, however, bought her a beautiful red dress on the eve of Valentine. I was then to call in sick the following morning.

Coincidentally, as I called her in the morning, acting very sick thus seeking to postpone our day out, she also reported not to be feeling well hence was going to see her doctor. I was overjoyed, not for her sickness, but the beautiful coincidence that lifted my guilt of lying.

In a restaurant somewhere along Moi Avenue I had sat for 20 minutes patiently waiting for Doris. She had texted that she was in town already. Apparently we had never conversed verbally – just via texts. She claimed her earpiece was faulty thus could only text. Fifty minutes later, Doris still had not yet arrived.

”How far?” I texted.  “In five mins, I shall be there babe,” she responded instantly.

The five minutes went to another 25. My impatience and frustration were at the apex. With the last hopes of a losing gambler, I decided to add her two more minutes. My eyes were permanently fixed on the entrance of the restaurant.

A minute later a girl in a beautiful red dress and a fedora hat, sashayed into the restaurant laughing rather carelessly.  On her side was a short potbellied man holding her waist while the other hand held car keys.

The girl looked strangely familiar, and so was her red dress. But even more familiar was the potbellied man. He verily looked like my father’s brother. Indeed he was the rich uncle who had just loaned me ‘project’ money. He had spotted me already and was heading to my table.

“Mr Dan , you are here having lunch all alone on a day meant for two, how selfish,” Uncle Tom started.

“Meet my friend Carol,” he added, pointing at Carol.

‘So this is your doctor?’ My eyes silently questioned  Carol. Her eyes seemed to respond. My Carol, my beloved, the love of my life, my perfume of sanctity….how painful!  My uncle Tom, an engineer, was a Carol’s doctor.

Carol greeted me cheerfully, as if she had just met me for the first time and even had the audacity to add, “Pleasure to meet you, Dan.” I feigned a smile.

But wearing the dress I had bought her to another date was unimaginable. The thought that it was actually uncle Tom’s money was a slight consolation.

Doris never turned up. Sandra for the first time in a very long while was suddenly unreachable on the phone. I was crushed . I was dejected. I was very bitter. Nairobi slay queens had conspired to kill me before my time. I felt very guilty that I had betrayed my loyal village girls.

I immediately got home and phoned Marystella, apologizing and giving all those robbery stories. She listened keenly without a word then asked, “Did Doris turn up or was she also attacked by robbers?”

Before I responded, shocked of course, another voice chimed in, “Dan, you are very shameless to play cousins, imagine cousins in the same village?” It was Atieno’s voice.

I must have underestimated Marystellah. But was it necessary for her to monitor me through a pseudo account? I was dumped like a pariah dog. 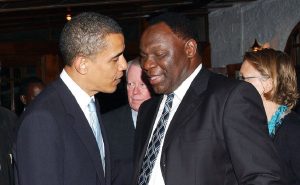