One interesting aspect of the FY 2020/ 2021 budget is that the country is slated to pay its creditors Ksh904.7 billion, creating a deficit of Ksh823 billion which is expected to be plugged by more loans.

Although the government is negotiating moratoriums for its credit facilities, Treasury Cabinet Secretary Ukur Yatani is on record stating while the government might get some short term relief on that front, the country will still have to service its debt obligations in the near future.

However, the counties are penciled in to receive only Ksh316.5 billion as equitable share from the national government with the remaining Ksh53.4 billion being earmarked for conditional grants and loans.

At the height of Chief Justice David Maraga’s bashing of President Uhuru Kenyatta, the Judiciary is expected to receive Ksh18.1 billion while parliament is expected to gobble up Ksh37.1 billion.

The government estimates that ordinary revenues will stand at Ksh1.6 trillion, that figure put against the nation’s recurrent expenditure means that there will be no money to finance development projects and the government will still be required to borrow to pay salaries even before the government’s appetite for infrastructure projects is factored in.

When he replaced his predecessor Henry Rotich, Kenyans breathed a sigh of relief as Yatani vowed to replace Kenya’s uber-expensive commercial loans with concessional loans, earning him the nickname ‘Mr Austerity’ in the process.

The government though has hinted that it might be forced to borrow in order to pay salaries- that is the antithesis of austerity.

Factor this, Treasury projects total revenues at Ksh1.8 trillion of which Ksh1.6 trillion would be ordinary revenues, Ksh.249.1 billion as ministerial appropriations and Ksh36.1 billion as grants.

But there’s one problem, holes have already been poked into the overambitious plan with the Ministry of Environment conceding that the Ksh4.62 billion target set for it by Treasury is unrealistic as it is only in a position to collect Ksh920 million.

Speaking during an interview on Thursday Philip Muema Managing Partner Andersen Tax said the country is punching above its weight and the budget for the fiscal year starting July 1 does not reflect the COVID-19 reality that the country finds itself in.

“We started living beyond our means during the second term of the Jubilee administration that’s the reality. If you look at the Ksh2.7 trillion, we already grappling with a Ksh6.3 trillion debt, 50% of which is external. We have already stretched the tax measures so thin that we cannot stretch them any further,” said Muema.

“Numbers don’t lie, KRA is expected to collect Ksh1.6 trillion, where will the deficit come from? It means we will have to borrow,” added Muema. 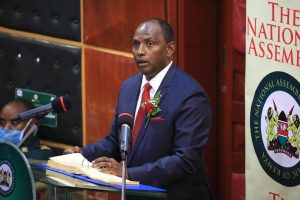 Budget: The Key Highlights
Government to withhold funding to Ministries, Departments and Agencies which…