A traffic jam on the Thika ‘Super Highway’ into the CBD at the NYS area. Most roads are notorious in Nairobi during rush hours. [Photo/3neel]

Nairobi is notorious when it comes to traffic jams in rush hours. This is occasioned by the mass movement of people in the morning when going to work and in the evenings when going back home.

In 2017, Numbeo estimated that it took 62 minutes on average to commute from residential areas to the city centre then.

The green city in the sun tops the list on the continent making it the worst city to drive in in Africa.

On the brighter side, the same ranking showed that Nairobi’s traffic produced less CO2 emissions in comparison to most countries in the world. This is due to the tree cover and the number of vehicles on the roads.

Nairobi beat Cairo, Pretoria, Johannesburg and Cape Town to top the ranking in Africa while it now comes only second to Sri Lanka’s Colombo. Ironically, time spent in traffic has reduced by five minutes to 57.30.

According to the government, traffic jams were costing Nairobi an upwards of Sh2 billion per year in lost productivity.

While this may have improved over time with the ongoing expansions and the construction of bypasses, there are still some roads which remain infamous due to the persistent congestion.

While the matatu culture is largely to blame, confusion by road traffic marshals and police has made things worse since drivers are confused on whether to obey the lights or the humans.

Roads with the worst traffic jams in Nairobi

The road network in Nairobi remains a mystery in that despite the expansions, traffic jams are always a menace. If it rains, for instance, Nairobi becomes one hell for drivers.

It is like the roads are washed away leaving very few narrow paths which the thousands of vehicles have to squeeze into to get in and out of the city.

This situation could be due to the residential premises and offices being concentrated in the CBD but then again, courtesy is rare on these roads.

The worst roads to drive on in Nairobi include:

The big number of people using this road from Ngong, Karen and Dagoretti mean that the road is not ‘enough’ to cater to the demand during rush hours.

It is one of the busiest roads in Nairobi today and with the ongoing construction works, the situation has moved from bad to worse.

While the inconvenience caused by the construction is temporary, the hope is that once completed, the road will become easier and smoother for users.

This has remained an eyesore and undoubtedly one of the busiest roads in the city.

The road serves the high population Nairobi’s Eastland area. Places like the once bourgeois BuruBuru and Donholm estates, Umoja, Innercore, Embakasi, Jericho, Makadara and Kayole are the contributors of the crazy traffic on this road.

However, the latest expansions could be a saviour only if the rogue matatus plying the route could learn to be courteous on the roads.

LA is one of the places where new (young) money lives. This means that there are many more cars per capita. With this, Langata Road is another headache for drivers during peak hours.

Traffic on this road is at its worst in the morning and in the evenings.

When Thika Road became a ‘super highway’, it was a relief for the hundreds of thousands who used it since it brought reprieve after years of endless traffic jams.

The insanity seems to have crept back though during peak hours in the morning as commuters rush into the CBD.

Since there is massive traffic on the road, the buildup into the city centre can stretch as far back as the NYS area on bad days.

The Globe Roundabout interchange has not offered a lasting solution since traffic builds up from this point.

While it is easier getting out of the CBD, it is crazy getting in during rush hour.

This road is the gateway into Nairobi from Western Kenya and Kiambu and with the expansion works going on, it can be painful using this road. The best is to avoid using it during peak hours unless it is absolutely unavoidable to.

This road is being expanded all the way to Kamandura in Limuru and it will be a relief for road users who have had to contend with crazy traffic on many occasions. It was a dual carriageway and with the construction complete, it should be bliss using it. This is, unless, all Nairobians decide to move to Limuru exporting the Thika Road menace into town.

As a driver, the best way to avoid the headache is to evade driving onto the CBD during rush hours. 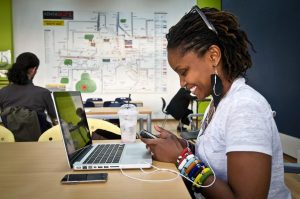