McDonald Mariga has had his candidacy for the vacant Kibra constituency seat invalidated after his name was not found in the IEBC register. [Photo/Skysports/Twitter]

MacDonald Mariga, the only Kenyan to have won the European Champions League, will for the meantime not vie for the vacant Kibra Constituency seat after IEBC said his name was found not to appear on the electoral body’s register.

Mariga, who had been awarded his nomination ticket by Jubilee Party so as to fly the ruling party’s flag in Kibra, was denied on grounds that he is not a registered voter. The Constitution bars Kenyans who are not registered voters from vying for an electoral seat.

According to IEBC, Mariga’s name, having not being found on the electoral body register, was therefore struck off the nomination list for the November 7 Kibra Constituency by-election. The invalidation of Mariga’s candidacy came when Mariga, along with fellow Jubilee Party politicians submitted documents to the electoral body.

Jubilee Party meanwhile accused IEBC of not following through on its work of ensuring that Mariga’s name was found on the register. According to the ruling party, Mariga is a registered voter, having already handed in an application of the same to IEBC.

“Failure of IEBC to do their administrative work cannot deny a Kenyan his or her constitutional right to vote and vie,” Langata MP Nixon Korir told reporters.

Mariga is a former Kenyan international football superstar turned politician who it seems has already found that swimming with the political sharks is not an easy tide.

The political ambitions of the former Harambee Stars captain, who is also famous for being the face of betting firm Betin, seems to have been dealt a heavy blow with this latest IEBC setback.

Mariga, who described the incident of his invalidation as being “sad”, was not allowed to answer a question as to when exactly he applied for registration as a voter. He was silent throughout the pleading of his case before IEBC officials in Kibra, as Korir and former Kakamega Senator Bonny Khalwale defended him.

Jubilee faulted IEBC for using a register from 2017, whereas voter registration was still going on. “We are saying that if a Kenyan who is above 18 years of age registers in the morning and applies in the afternoon, their application would still be valid,” said Korir.

According to Jubilee, the party has an acknowledgement slip from IEBC, acknowledging Mariga’s application to become a registered voter.

Mariga, who won one of the games highest accolades when he lifted the UEFA Champions League in 2010 with Italian club Internazionale, will have to wait another seven days to know his fate as that is the period in which Jubilee can appeal IEBC’s decision. 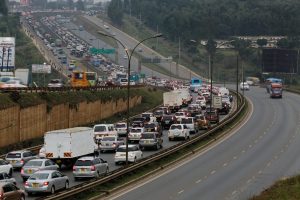 Roads to Avoid in Nairobi During Rush Hour
According to the government, traffic jams were costing Nairobi an…