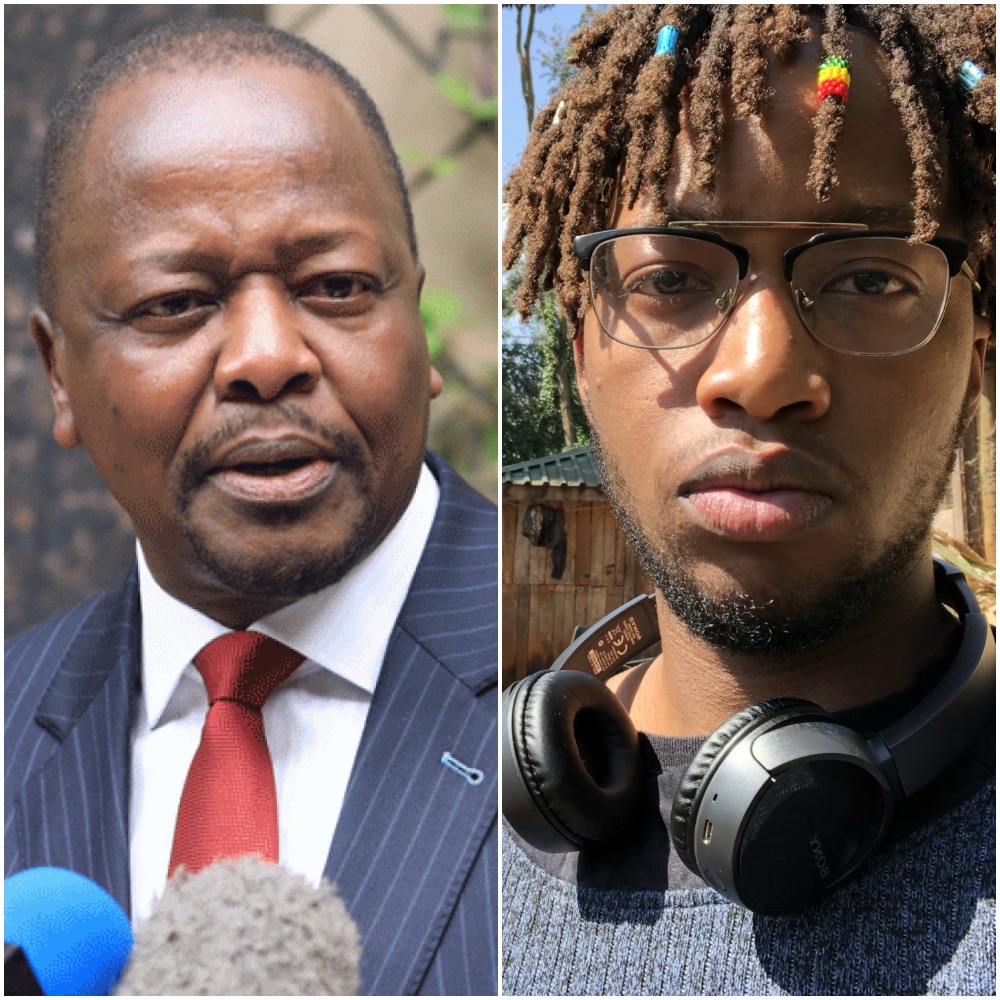 Health Cabinet Secretary Mutahi Kagwe (left) and his rapper son Kahush (right). Kagwe is on the spot over theft of COVID-19 funds at MoH. Kahush has taken flak from certain quarters but Samuel Gitonga opines this is an opportunity for the younger Kagwe.

For the better part of Tuesday, Kahu$h, Health Cabinet Secretary Mutahi Kagwe’s son was the target of a bunch of keyboard warriors who were happy to blanket lynch him after a report that exposed the theft of COVID-19 funds at the Ministry of Health (MoH) and the Kenya Medical Supplies Agency (KEMSA) attracted the ire of the public.

In any society, there are always extremists who will discredit and disparage others as soon as a window of opportunity presents itself, this time it was Kahu$h turn to bear the brunt.

Kahu$h, whose real name is Kahumburu Mutahi is a rapper who rose to national prominence as soon as his father became the Cabinet Secretary for Health. For clarity’s sake, the former’s music was doing relatively well for an upcoming Kenyan musician but the boost of a newsmaker took his music to the exclusive more than 1 million views on YouTube club.

He studies Politics and International Relations at the Nottingham University in the UK and is only in the country due to the COVID-19 situation.

His hit song ‘Mi Siwezi‘ had 1.15 million views on YouTube by Wednesday and has received rare reviews from critics in the Kenyan hip-hop music industry. Award winning Kenyan rapper Khaligraph Jones whose real name is Brian Omollo has already expressed interest in featuring in a potential remix to the song.

Before the prominence, Mi Siwezi had 500,000 views on YouTube.

Another of his songs “Mastingo” featuring Chris Kaiga released on July 24, 2020, had already clocked,719,662 views on YouTube by the time of publishing this article, an indication that he has already built the momentum and the onus is on him to ensure that he reaches the promised land even if he comes across crocodiles on his way there.

On Tuesday, the crocodiles were in plenty, baying for his blood, but the smart thing for him to do is ignore them completely and concentrate on himself and his music.

In media circles, there is a saying that states that; There is nothing such as negative publicity, any publicity is good publicity it depends on how the subject spins it to their advantage.

Kirinyaga Governor Anne Waiguru is the embodiment of this saying after she rode the negative publicity from the infamous National Youth Service (NYS) I Scandal and used it to launch her political career and is now sitting pretty as the county chief.

Although the accusations leveled against Waiguru have not been proven in a court of law, there is good reason to believe that she was one way or another involved in the NYS heist and the public criticism that came her way was justified.

In the Kahu$h scenario, the rapper was being bashed for something he is clearly not responsible for while claims that his music has been sponsored using corruption proceeds are yet to be substantiated, making it empty talk.

Speaking in an interview with NRG radio on June 4, Kahu$h made it abundantly clear that politics is not his cup of tea and he is unlikely to follow his father’s path to the Kenyan political scene.

“No I do not, I will never. I can say this for sure. You will not see me in politics,” said the rapper while adding that he was not concerned that his father’s prominence was inhibiting his plans to cultivate his own image.

“I already had something going by the time that happened (his dad’s appointment as Health CS), It is only a big thing between two people that have created something for themselves so It doesn’t matter because everybody knows that we have our own lane and we do good in our own lane,” said Kahu$h.

All factors considered, why is he being dragged into his father’s business?

The radio interview foreshadowed that it would reach a point that he would be harassed by the Kenyan media but the rapper stated that was the least of his concerns and would worry about that when he got to that juncture.

Very many Kenyan artists struggle to rake in the numbers that Kahu$h is doing with relative ease at the moment,

In journalism class, one of the first things that students are taught is that prominence is a news value, and the Mutahi Family is not short of that.

Maybe, Kahush should seize the opportunity, ignore the naysayers and proceed with the journey to Canaan.