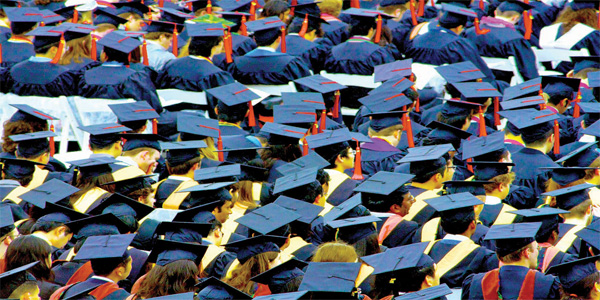 University students during a graduation ceremony. CEOs of multinationals are in awe of the quality of Kenyan talent

An article on Hinds’ pronouncement published by Daily Mail soon after portrayed Kenya as a hotbed of this kind of cheating, the report stated that while engaging the essay mills, British students insist on Kenyan writers to do their assignments due to their proficiency in english and their ability to deliver on strict deadlines.

The students from Strathmore University beat their counterparts from 90 other law schools from across the world after preparing and analyzing a fictive case and presenting their arguments both for the complainant and the respondent in front of a panel which comprises of WTO and trade law experts.

During this writer’s interactions with business leaders, one observation has stood out, that Kenyan talent is rated highly, just like in the first two occurrences except that the essay writing enterprise integrity is questionable.

The CEOs and Managing Directors have often indicated that one of the reasons multinationals choose Kenya is because of the quality of talent at their disposal.

Queried why Nairobi was an attractive proposition for the firm, Maxime Claessens, Director of Cigna’s Kenyan operation said that while potential business opportunities was the major draw, quality talent in the country was a major contributing factor in the decision to set up shop in Nairobi.

“We were already operating in the country. We had done our research and one of the reasons we decided to open our continental headquarters here was because we knew that we could tap the talent we needed in Kenya, the quality of the Kenyan workforce is exceptionally high,” Mr Claessens told Business Today while comparing Kenya to similar size economies.

Mr Claessens is not the only CEO to be in awe of Kenyan talent, in an interview with Business Today on June 11, Knight Frank Managing Director Ben Woodhams also expressed his appreciation of Kenyan talent.

“One thing that I’ve noticed is that the level of education is definitely higher and Kenyan talent is quite sharp,” said Mr Woodhams who has been the real estate firm’s Managing Director in Kenya and Tanzania.

Conversely, Radisson Blu General Manager Robert Kucera, a South African who doubles up as East Africa District Manager for the hotel chain also told Business Today during an interview that even the quality of menial workers in Kenya surprises him.

“In Kenya the education level is higher, even a normal waitress in Kenya sounds educated, their level of thinking is higher,” said the hotelier who has worked in different countries across Africa. “I am just from a meeting with union leaders and in my interactions with its members gives me the feeling that Kenya is ahead of many countries in terms of the sheer quality of its workforce,” added Mr Kucera.

This comes in the wake of the current COVID-19 pandemic, which has significantly affected business operations, especially at the workplace.

You only have one choice, change your mindset, develop your character and refine your skills for entrepreneurship.

The Covid-19 pandemic has hit the employment sector hard across the world with job losses being recorded in millions.

Most employers accept or reject job hoppers depending on existing hiring policies and practices and job requirements.