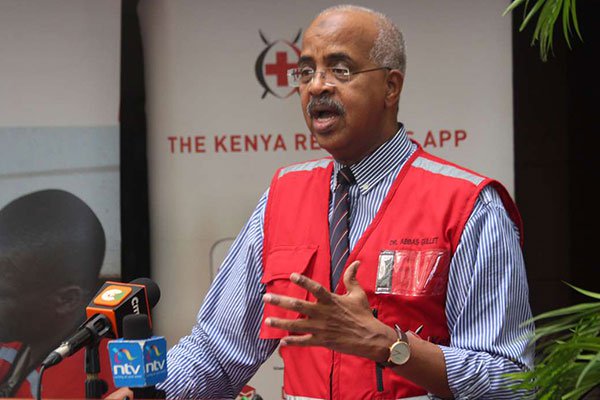 Kenya Red Cross Society Secretary General Dr Abass Gullet. The society is on the spot over gross mismanagement of its business wing.

Red Court Limited, the company that runs three hotels owned by the Kenya Red Cross Society (KRCS) has been placed under administration as the firm struggles to keep the business afloat forcing a situation where the business has to be protected from creditors to stop it from going under.

The company was placed under administration on December 9 and P.V.R Rao appointed the administrator by National Bank, recently acquired by Kenya Commercial Group (KCB) which is demanding millions advanced to the hotel group after the loans matured and are yet to be serviced.

In a statement published in local dailies, the administrator has prohibited the hotel’s management from transacting any business on behalf of the Company without express written consent from him.

“The administrator is the agent of the company and does not accept any personal liability,” read the notice.

In another statement, KRCS Secretary-General Abbas Gullet blamed the poor performance of the society’s business wing on failure by customers to pay up their debts and a tough operating business environment.

“In 2010, the society made the decision to seek alternative sources of revenue after the Government of Kenya withdrew funding and dwindling funding from international donors,” said Dr. Gullet in the statement.

According to Dr. Gullet, the society ventured into the hospitality in 2007 and built the Boma Inn Nairobi, a three-star hotel which was followed by the five-star Boma Hotel Nairobi in January 2013 and the three-star Boma Hotel in Eldoret in September 2013.

“The Boma Inn Nairobi was put up using internal resources while the Boma Nairobi and Boma Inn Eldoret established with loans from several local banks. It must be noted the society acted on the best advice available at the time and it is on this advice that the banks agreed to advance these loans,”

“The hotels have generally performed well and have met their financial obligations including servicing their bank loans. It has to be noted that the Boma Inn Nairobi has no loan obligations while The Boma Inn Eldoret is up to date with loan repayments,” added Dr. Gullet in the statement.

However, Dr. Gullet’s position on the matter does not tally with official records which show that Red Court had been cooking books in an attempt to make it seem like the hotels were doing well while in fact, they were bleeding financially.

The reports also indicate that the last time the business was in positive territory was in 2011 after which the business went from bad to worse to the extent that insolvency levels hit the ksh1.4 billion mark.

At some point, the hotel group was unable to pay its employees’ retirement savings despite having been deducted and takes remitted to the Kenya Revenue Authority (KRA).