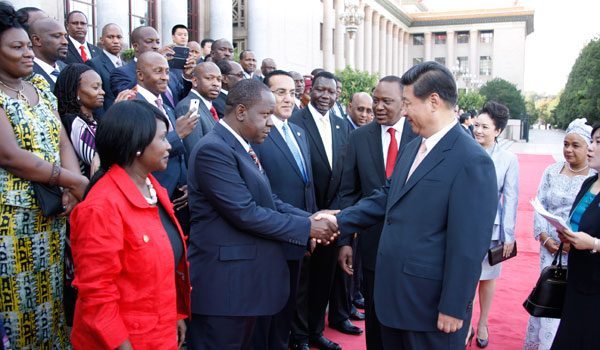 Kenyans on social media have seen it all! In recent years, there has been a sustained misinformation campaign aimed at tarnishing China’s image in the country. And, going by the current trend, it is bound to get vicious.

One strategy of this social media smear campaign has been to depict the alleged production of counterfeit, or sub-standard goods, from China. The sensational clips, whose source remains unknown, show how China is purportedly producing fake food products like milk, eggs, rice and fish.

The posts have also shown the Chinese engaging in menial jobs in city estates and rural towns, including roasting maize, and offering i*****l services like p**********n. The aim, of course, is to show how Kenyans are being gradually disenfranchised in their own country.

Some local politicians seem to have been co-opted in this propaganda stratagem. A couple of them have stood both in Parliament and public rallies decrying what they say is the growing Chinese takeover of businesses run by indigenous Kenyans. One politician even proposed that the Government caps the shareholding of Chinese companies, depending on the amount of investment. What they did not say is that generally, over 90% of employees in Chinese projects are Kenyans.

Then there are questions about China’s commitment to help fight c********n in African countries, similar to its zero tolerance towards the vice at home. This exposes the critics’ ignorance in China’s policy of non-interference of host countries, and belief in the latter’s self-determination.

There have also been worries about Kenya’s huge trade deficit with China, which is potentially seen as undermining the former’s economy. But any qualified economist would explain this through the fact that the status quo is as a result of the globalized market, and the difference in the economic structure between the two countries.

In addition, the Kenyan market has a huge demand for Chinese products due to their competitive advantage in quality and price, something that has markedly improved the standards of living of the people.

Fortunately, the majority of Kenyans have seen through the cheap lies. This fact is attested to by the thousands of Kenyans who have travelled to China this year in search of trade and business opportunities. Indeed, figures do not lie. China has gradually displaced Kenya’s traditional trade partners. In 2017, trade between the two countries surpassed $4 billion, accounting for 17.2% of Kenya’s total trade with the world.

Doubts have also been cast about the true cost of Kenya’s largest infrastructural project ever, the Standard Gauge Railway (SGR). The propagandists claim that the cost was inflated in order to benefit Kenya Government officials.

Well, what they did not give are the facts. The chief reasons are the very high bill of quantities and other logistics needed for construction of the SGR due to the difficult terrain along the route, and other specifications not comparable to similar projects in the region.

The recent opening up of China for imports from other countries globally has come at an opportune moment. Kenya’s President Uhuru Kenyatta attended the first ever China International Import Expo (CIIE) taking place in Shanghai from November 5 to 10. Kenyatta is accompanied by a 100-strong business delegation drawn mainly from the services, food and agricultural sectors.

The CIIE has been endorsed and supported by the World Trade Organization, UN Conference on Trade and Development, and the UN Industrial Development Organization. The conference is part of President Xi Jinping’s strategy of shared prosperity, and win-win cooperation with the rest of the world.

Ultimately, developing countries like Kenya should take advantage of China’s mentorship to achieve holistic development, socially and economically. There is no doubt about it. China has a soft spot for Kenya, and the latter needs to fully exploit the preferential treatment the offered.

There are some critical areas of immediate concern. For instance, China could help Kenya to meet sanitary and phytosanitary regulations in order to facilitate more access for agricultural products to its market. Previously, this has been a challenge with Kenya’s horticultural produce exports to the European Union.

Kenya must also find creative marketing strategies to attract more than the 70,000 tourists who visited this country in 2017. According to various statistics, over 100 million Chinese made outbound trips last year. Indeed, Kenya’s corporate and business sectors have a lot to learn. The country must diversify and expand its core export products and services.

11 Services Unvaccinated Kenyans Will Be Denied This Christmas