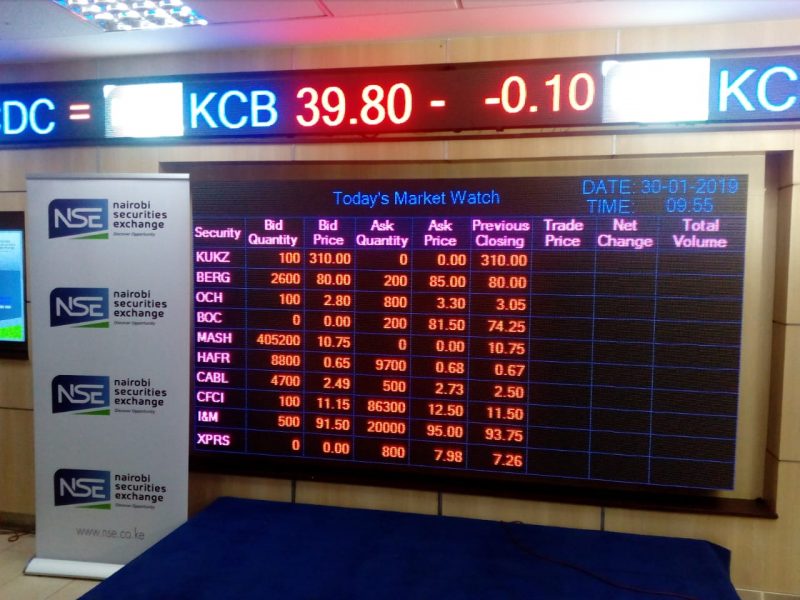 Weekly turnover at the Nairobi Securities Exchange (NSE) closed at Ksh3.8 billion for the five day trading period that ended on May 31.

This translated to a 52% jump week on week, having posted Ksh2.5 billion by end of last Friday.

The rise was boosted by sale of shares in the Banking and Telecommunications sector over the course of the trading days.

Twice, the NSE turnover breached the Ksh1 billion mark over the five day period, with Safaricom, Equity, Co-op Bank and KCB being responsible for the high turnover on a number of occasions.

Safaricom was the week’s main feature at the bourse, transacting 65.7 million shares that were valued at Ksh1.8 billion.

The giant telco’s market activity over the five days saw the Bob Collymore led firm trade as high as Ksh28.65 and hitting a low of Ksh26.50.

Volume of shares during the week also rose to 135 million as compared to the previous week’s 101 million.

Bonds worth Ksh19.3 billion were transacted by closing bell on Friday compared to Ksh11.2 billion posted the previous week.

With Safaricom’s activity accounting for the Telecommunication Sector, the second highest mover during the week was the Banking Sector.

Lenders listed at the NSE had shares worth Ksh1.3 billion transacted which accounted for 36.29% of the week’s traded value.

[Read: Citizen TV reporter off to The Economist]

The Commercial & Services Sector had shares worth Ksh45 million transacted, 1.19% of the week’s traded value.

In the Energy & Petroleum Sector, shares worth Ksh49 million were transacted which represented 1.29% of the week’s traded value.

The Manufacturing & Allied Sector had shares worth Ksh455 million transacted which represented 11.95% of the week’s traded value.