Former NACADA boss John Mututho during a past press conference

﻿Former National Authority for the Campaign Against Drug Abuse (NACADA) Director General John Mututho has weighed in on the controversial bill by Kibra MP Ken Okoth seeking to legalise production, distribution and use of bhang.

Speaking to journalists in Nakuru County on September 26, the former Naivasha MP who is renowned for his tough stances against drug abuse described the bill as a piece legislation seeking to establish a criminal enterprise adding that he will move to court to seek legal redress if parliament passes the bill.

“I am strongly opposed to legalisation of bhang in Kenya. Whereas I agree with the MP that the drug has a certain level of medicinal value, the disadvantages far outweigh the one advantage that the drug has which is one per cent,” said Mututho.

He further faulted the bill for seeking to introduce a regulator that will govern the use of marijuana in the country.

“I have read the bill and I can tell you that the board that the bill is seeking to establish comprises of people who want to make money out of the regulation process. It leaves out critical stakeholders like the Interior Ministry, the Anti-Narcotics Police and NACADA,’ said Mututho.

Mututho, who is now an advisor to Governor Ferdinand Waititu on drug abuse in Kiambu County, added, “Any MP who supports the bill should be treated as an enemy of the public. Parliament is an assembly of respected leaders and not a den of thugs. This bill is a subversion of MPs’ legislative mandate,”

On September 21, Mr. Okoth wrote to National Assembly Speaker Justin Muturi informing him of his intentions to sponsor the bill.

The Kibra MP wants the State to decriminalize and institute amnesty measures as well as expunge criminal records against Kenyans convicted for marijuana use.

The legislator is also proposing regulation for safe use of marijuana and hemp including registration of growers, producers, manufacturers and users.

Mr. Okoth’s push to legalise the drug comes hot in the heels of a ruling by South Africa’s Supreme Court that legalised the private use of cannabis on September 18. South Africa became the third African country after Lesotho and Zimbabwe. 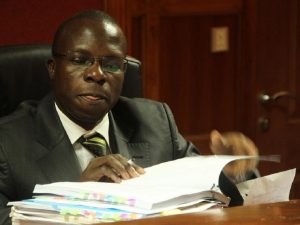