﻿Kibra MP Ken Okoth has written to National Assembly Speaker Justin Muturi seeking to have production, distribution and use of bhang legalised.

The youthful MP wants the State to decriminalize and institute amnesty measures as well as expunge criminal records against Kenyans convicted for marijuana use.

Okoth is also proposing regulation for safe use of marijuana and hemp including registration of growers, producers, manufacturers and users.

If his proposal sails through, the MP wants special focus to be placed on protection of children and minors from the substance similar to the way they are protected from tobacco and alcohol currently.

“The proposed bill seeks to ensure that there is research and policy development on growth and use of marijuana and hemp for medical, industrial, textile and recreational purposes with special focus on preservation of intellectual property rights for Kenyan research and natural heritage, knowledge and indigenous plants assets,” reads part of the legislator’s proposal.

In a tweet he added, “It’s high time Kenya dealt with the question of #marijuana like we do for miraa, tobacco, and alcohol,”

At a time when Kenya is facing a tough economic times, the MP also proposes progressive taxation measures for marijuana industry to “boost economic growth and promote job creation”.

This comes hot in the heels of a ruling by South Africa’s Supreme Court that legalised the private use of cannabis on September 18. The country’s apex court upheld a lower court’s decision that ruled it was “unconstitutional and invalid” to criminalize the drug.

“It will not be a criminal offense for an adult to use or be in possession of cannabis for his or her personal consumption,” Deputy Chief Justice Raymond Zondo said while delivering the landmark ruling.

In November 2017, a petition to legalise marijuana by Gwada Ogot, a researcher sharply divided the Senate.

The proposal presented to the house by Speaker Ken Lusaka was termed as a “waste of time” by Bungoma Senator Moses Wetangula who averred that the house ought to have been discussing more important issues.

In August this year, Simon Mwaura, a scientist also petitioned parliament to legalise cannabis sativa arguing that the plant has documented medicinal value and industrial use.
﻿ 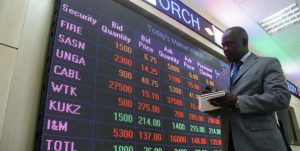 More than meets the eye in Kenya Orchards share price slump
The firm, which was founded in 1959, has not paid…