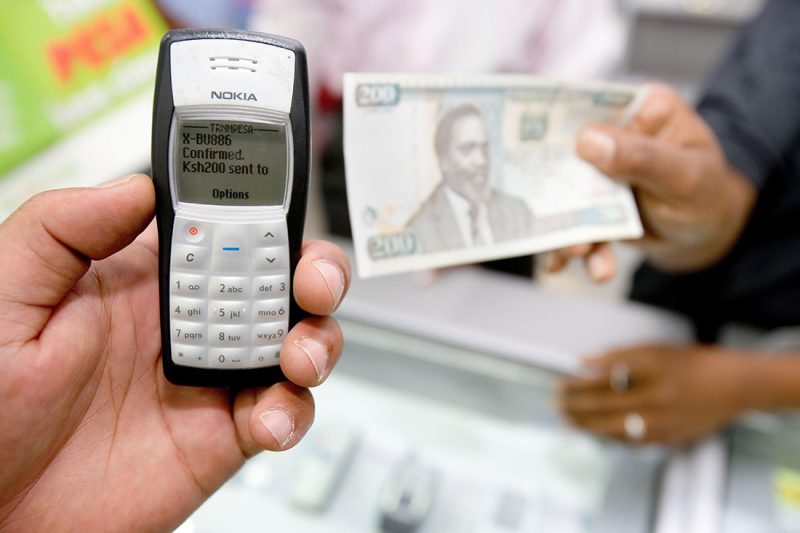 An M-Pesa transaction in progress The mobile money transfer service has been ranked among top 10 financial innovations in the last half decade globally.

Safaricom is the blue-eyed boy of the telco world in sub-Saharan Africa since it has continued to grow in leaps and bounds raking in billions in profits.

The super-profits that the company makes come from a majority of Kenyans who are either living under the poverty line or those slightly above it.

Safaricom’s super profits come from its mobile money arm M-Pesa which has won global acclaim as an invention that has helped Kenya improve its financial inclusion status.

Billions made from the cost of convenience

While shareholders are the biggest beneficiaries of this growth, M-Pesa users, on the other hand, end up enjoying the convenience of a mobile bank courtesy of their mobile phones.

This convenience comes at a cost which cumulatively makes the billions the company makes every year in profits.

In March this year, statistics from the Communications Authority of Kenya (CA) revealed that the demand for mobile money services grew through the last third quarter of the FY 2018/19.

Kshs 2.122 trillion was handled in 784.4 million transactions in the period where consumers spent Ksh 1.84 trillion to purchase goods and services.

For the purchases, it involved 571.5 million transactions.

And this is what put the icing on the cake for the company to declare jaw-dropping profits in a very difficult economic period.

Did you know that your hard economic time is bumper for someone else?

Picture this. When you pay for services through mobile money, you incur charges which if saved could push you a long way through dry economic patches.

In the CA statistics, Ksh 737 billion were person-to-person transfers which come at a cost.

This is where you come in to make Safaricom make its hay while the sun shines for both of you.

Now, if you’ve never evaluated your mobile money spending habits, you could be a financial fool, extremely rich or that you care less making your money enrich others.

We all hit financial rough patches every so often and if there is a piggy bank somewhere, you can always run to it in these times.

In case you have not noticed, financial dry spells make you know your friends and so-called friends.

It should never get to this level while you still have disposable income in the form of mobile money transaction fees.

Did you know that however stellar of a spender you are your mobile money services provider will never bail you out for free?

If this is the case, why do you keep bailing the multibillion entity out using your hard-earned cash?

There are several ways in which you can save some money and one of them is cutting fringe costs.

Evaluating and cutting down on costs that come with mobile money convenience is one of the ways.

Since M-Pesa takes the lion’s mobile money share, let us look at how we can make savings that could be a saviour on a rainy day.

Current transaction costs for Safaricom show that it costs you anywhere from Ksh11 to send amounts ranging from Ksh101 to Ksh 500 and Ksh 105 for amounts between Ksh 50,001 to Ksh70,000.

Assuming that you send Ksh 20,000 in different tranches every month, here is how it costs you.

If you send two of your folks in shags Ksh 5,000 every month, it costs you Ksh 61 and if you include withdrawal charges, it shoots to Ksh 128 since it’d cost them Ksh67 withdrawing from an M-Pesa agent. The total for the two transactions is Ksh 256.

Assuming you have two people on Ksh 3,000 retainer every month, it costs you Ksh 56 to send and Ksh 50 in withdrawal charges. This adds up to a total of Ksh 106 in charges in that one transaction. The total is Ksh 212.

Supposing you also have to send Ksh 1,500 twice in a month. It costs you Ksh 26 to send and Ksh 28 in withdrawal charges. This brings your total to Ksh 54. The total for the two transactions is Ksh 108.

If you send Ksh 500 twice every month to someone, it costs you Ksh 11 and Ksh 27 in withdrawal charges. The total comes to Ksh 38 per transaction making it Ksh 76.

Cumulatively for your Ksh 20, 000, it costs you a clean Ksh 652. This is not much but imagine this was a saving you were making every month?

Inflation is driving many Kenyans into a financial mess and any saving could come in handy for such a time as this.

So, if you are a Kenyan who ‘freely gives’ Ksh 652 to a telco every month, there is better that you can do.

While it doesn’t make sense in some cases to withdraw money from the bank to take it thousands of kilometres from where you are, it makes sense when the money that you spend on mobile money charges is saved.

In Kenya today, Ksh 652 can cover your bus fare for a week if you spend Sh100 per day on transport. This leaves you with Ksh 52 as savings.

The same amount can buy you 5.8 litres of super petrol in Nairobi while it can buy you bread and butter for more than a week.

If you are a health freak and can only eat kienyeji eggs, this amount can buy you a whole tray and still leave some change.

A lot more can be done using this money that you spend on convenience where possible.

However, it doesn’t add up if staying analogue will cost you more in terms of time. Time is money and it should be treated as an asset that depreciates and appreciates with time. For the best of both worlds, cut out convenience when it can make you savings but use it only if it becomes an investment.

Cumulatively, if you saved Ksh 652 every month, you would have Ksh 7,824 in a year and it could translate to so much more if this became a habit and you saved for 10 years. Who would not appreciate receiving Ksh 78,240 as a reward or as a well-deserved bonus?

Be wise and put your money where your mouth is. Kwani?

Businesses ought to conduct financial analysis during this period to identify areas that require adjustment.

Minet Kenya is applying its financial expertise to ensure customers do not have to liquidate assets or spend key funds to settle premiums.

People have had to adjust financially to the new environment, thereby affecting their long-term and short-term investments goals.