On Monday, an email from Little CEO seemed like a prank gone too far only that April Fools Day is months ago and the joke would have been in bad taste.

However, as it has turned out, it was no joke on the part of Kamal Budhabhatti but a continuation of the joke that is regulating Kenya’s public transport sector.

The matatu sector as is commonly known the world over is rowdy, messy and chaotic. It is one that is unpredictable despite being the means of transport for millions of Kenyans.

While the government has failed in streamlining the sector, the failed policies and lethargy in making the sector work is for good reason. There are cartels raking in billions from it and they would not risk that source of money closing.

Why should there be efficiency while the politically connected can milk billions from the inefficiencies of the sector?

“I would like to share some sad news with all of you. (It’s just a) Few days before we got a communication from the authorities that we are not allowed to hail a shuttle on Little. The Shuttles we hail are from our partners who are properly licensed, but we were told that it is not the right kind of license,” stated Budhabhatti on Monday.

Despite the inconveniences caused to the thousands of commuters using Little, the government just woke up after 7 months of the service realizing it was on the wrong licensing.

Speaking on Monday, he said the two companies were doing business in Nairobi contrary to their licenses.

“We run point to point shuttle services on our Little App. We have thousands of Shuttle riders who ride on our platform every single day, many of them several times a day. Most of them have been very happy with the service. It is efficient, it can be tracked, It’s on time, it’s clean and safe and off all, it’s not chaotic,” added Budhabhatti.

The Little CEO said it would have made more sense if NTSA engaged in a dialogue with the ride-hailing on how to work together and change the face of public transportation in the country.

“We have been running these services for the last three quarters, and we have proved that public transport can be operated in an efficient and profitable manner. A manner that can bring sanity in the chaotic public transport in our city.

But, the beneficiaries of the chaotic systems can have none of this.

The government launched the Bus Rapid Transport system over a year ago even marking the lanes on the roads but so far, no single bus is on the roads.

This is despite the Treasury allocating Ksh5.53 billion to be used in the construction of the special lanes for the high-capacity buses.

While no one is accountable for the failure to launch, the government is targeting the disruptors seeking to bring sanity to the sector.

Budhabhatti says that over several months, they have learnt what works even making changes to their technology to increase efficiency.

“We have been able to come up with the right ingredients to address the problem at hand. And I just hope that these efforts do not go in vain,” he says.

In an interesting coincidence, when Safaricom launched M-Pesa, there was similar opposition from banks which felt that the sector was not regulated by the laws available then.

But there is no one who can stop an idea whose time has come.

As Kenyans started adopting the revolutionary mobile banking, the Central Bank started working with Safaricom to formulate the legal model to govern the new innovation.

“I would have appreciated a similar approach on this matter. And I pray that happens,” adds Budhabhatti.

SWVL gets the short end of the stick

With Budhabhatti saying that they have big dreams, so do Kenyans who would want to see sanity on our roads.

But, just like with Little, SWVL has not been spared the harassment.

Through this week, the operators have been harassed by the County askaris and had their vehicles towed.

Most have had to find ways of picking their customers just to evade the chaos meted against the operators.

SWVL is yet to issue a statement regarding the harassment by the police and the cancellation of their operating license by the government.

Meja said that the NTSA has blacklisted the specific vehicles operating under the two companies invalidating their licenses.

“The vehicles under these hailing app companies acquired a Tours Service Licence (TSL). The authority notes that Little Shuttle and Swvl are operating the vehicles contrary to the provisions of the PSV regulations,” he said.

Meja said that the two companies will only be able to operate when they comply with the PSV Regulations. 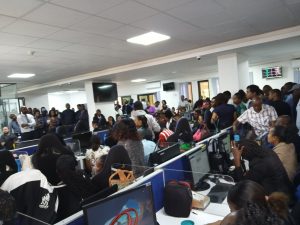