There is no time Kenyans have felt proud to be born in this country than in the past few weeks. Eliud Kipchoge made Kenyans proud, really proud.

Kenyans widely rubbished at the retired marathoner for his utterances after Kipchoge achieved the impossible. Probably it was out of the excitement of seeing their countryman achieve what was deemed as impossible.

They now became converts; they believe that, indeed, no human is limited.

However, if the conditions were changed, Eliud Kipchoge would probably have not achieved this fete. All preparations towards the marathon were geared towards boosting Kipchoge’s chances of finishing the 42km marathon in under 2 hours.

It was the football equivalent of a fixed match.

Kipchoge was very confident before the race, he knew that he was going to make it. The marathon was highly publicised months before the attempt, everyone was confident Kipchoge was going to do it. The organizers looked at every detail and exhausted every possibility of what may happen to hinder Kipchoge from shocking the World.

However, to be sure that Kipchoge would finish the marathon within the set time, the organisers had to breach the International Association of Athletics Federations (IAAF) rules. Running under IAAF guidelines would make it impossible to finish the marathon in under 2 hours.

The location and the route of the marathon were specifically chosen to give Kipchoge an easier job running the marathon. A variety of dates and times were set to prevent any hiccup due to unavoidable natural circumstances.

All of Eliud pacesetters seemed to use a specific formation whenever they came in to set the pace for the Kenyan marathoner. At any given time during the race, Kipchoge ran alongside seven pacemakers who were strategically placed around the Olympic gold medalist.

Five pacemakers were in front of him in a V formation. Kipchooge was placed at the bottom of the formation with two pacemakers running behind him. During the run, the pacemakers worked in teams to rotate in and out of the race during each of the 9.6km laps of the course.

The reason behind this specific formation was to eliminate much of the wind resistance that slows any runner.

Eliud Kipchoge trailed an electric car that had a beam laser that guided his pace ensuring he maintained a consistent speed.

According to Ross Tucker, a Sports scientist, as quoted in the Economist, the benefit of drafting behind the vehicle and other runners was worth two minutes to Kipchoge. This would make a great difference meaning he would not have succeeded without that help.

In a normal IAAF marathon, Kipchoge would not have been allowed to have the advantage of any of these things.

During Kipchoge’s first attempt to run a marathon in under 2 hours, Nike created a new pair of shoes dubbed ‘The Vaporfly 4%’ which were claimed to make runners 4% more efficient. He was not successful using these shoes and Nike had to go back to the drawing board.

For the INEOS 1:59, Kipchoge had something new on his feet. Prototype images of what was thought to be an updated version of the Vaporfly 4% appeared on Instagram while Kipchoge was still training for the attempt.

During the actual attempt, the marathoner donned a new pair of custom trainers. The trainers, called alphaFLY, are said to include three carbon fibre plates, and four pods of aim or foam that are designed to make runners more efficient.

The alphaFLY are said to be more efficient than the Vapofly 4% hence helping Kipchoge achieve his target.

However, there are no restrictions by IAAF about the type of trainers a marathoner chooses to use. 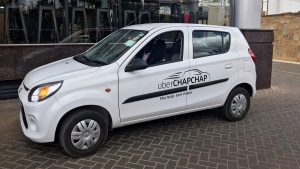 Uber Features that Help You Get More Services for Less
Every great ride starts with the pickup, which is why…