A tweet and message board claiming that Deputy President William Ruto urged Kenyans to accept the International Court of Justice’s verdict on the Kenya-Somalia maritime border dispute is false.

After a seven-year battle, the ICJ issued its decision on the Kenya-Somalia sea dispute on 12th October. The court rejected Kenya’s claim to the disputed territory. It instead divided the two countries’ maritime border, awarding nearly two-thirds of that territory to Somalia, citing international law and practice.

The tweet, accompanied with a message board, says: “The Deputy President of the Republic of Kenya, out of his hatred for the President thanks the ICJ for handing Somalia our territory. Such people should never be allowed to lead this country.” 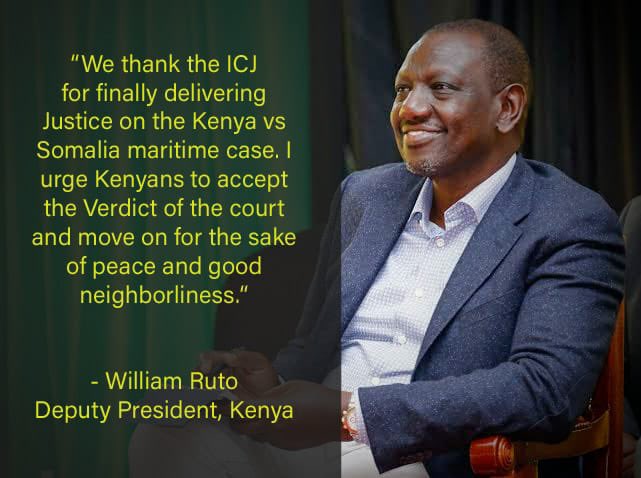 A fact-check on the tweet and message board reveals that they are fake. DP Ruto’s social media accounts Facebook and Twitter, which he actively uses to issue announcements, do not have any response to, or comment for that matter on, the ruling by ICJ. Also, no mainstream media carried an article to tis effect since Dr Ruto has not yet talked about the ICJ’s ruling. Even a Google search does not return any positive results.

>> Banks Safe-Keeping Services Not As Expensive As You Think

The Kenya government, though President Uhuru Kenyatta, rejected the decision by the International Court of Justice (ICJ) to favour Somalia in a drawn-out dispute over the maritime border, saying that it is “profoundly concerned” over the decision and its implications on the region.

The Hague-based United Nations’ highest court drew a new border close to the one claimed by Somalia although Kenya kept a part of the 100,000 square-kilometre (39,000 square-mile) area.

>> How Headline On ICJ Was Changed To Capture Ruling On Kenya

Rose Kimotho: Power Woman Who Built K24, Kameme & Why She Sold Them to The Kenyattas