Social media posts made on 7th October on Facebook and Twitter indicated that Murkomen had announced that Deputy President William Ruto’s political team is abandoning him. It added that the DP, who is gunning for the presidency in 2022 elections, was planning to decamp to the Raila Odinga led camp of ODM. The posts were shared by several uses on Facebook.

“We must tell our son the truth. Let’s retreat back (sic) and support Raila and ask him for favour in 2027. We’re going to the opposition and we will pay it dearly more than the Luos in the last 10 years,” one of the posts quotes Murkomen as saying.

Prominent Nairobi lawyer Donald Kipkorir amplified the information, emphasizing that Mr Murkomen had indeed decamped UDA. “If my Senator Kipchumba Murkomen has left UDA, who are you to remain?” he posed in his tweet. 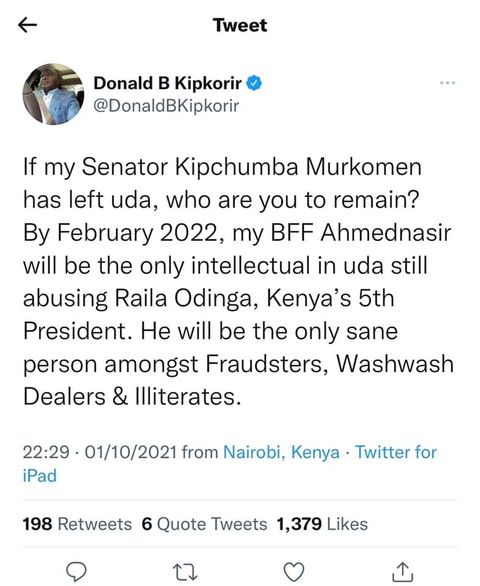 A fact-check on the claims revealed they were fake. Murkomen disowned the information and posts. He stated in the tweet posted on the same day that he had been on an official visit to America and the misinformation was the work of ‘propagandists, bloggers and busybodies’. He urged his supporters to ignore the claims.

See >> The Rise And Sudden Fall Of The Ndichu Twin Brothers

“Just returned from the US Capitol where we held meetings with Congressmen on matters of mutual interest to our two countries,” Mr Murkomen said in his posts on Facebook and Twitter. “In my absence propagandists, bloggers, busy bodies and all manner of nose parkers have been peddling rumours and writing silly notes in my name. Desperados. Ignore them.”

Also, a Google search reveals that no credible media houses or websites reported the claims. Only one website reported on the issue while another carried Murkomen’s response to the posts.

VERDICT: Social Media claims that Elgeyo Marakwet Senator Kipchumba Murkomen has defected from the UDA party as false as the lawmaker has dismissed them and confirmed he is still in UDA.