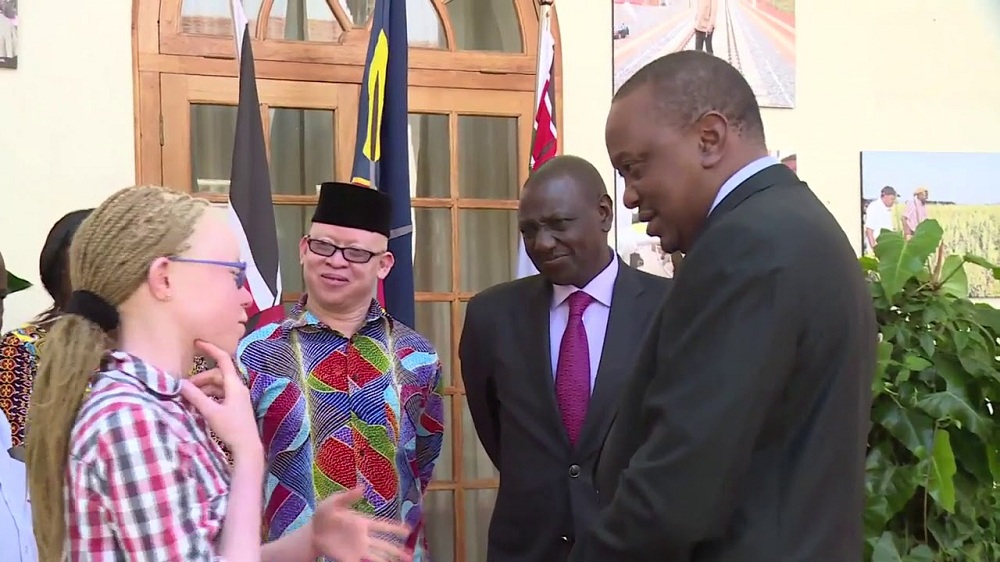 [dropcap]H[/dropcap]arrison Tanga knew that something was wrong as he walked into the labour ward in western Kenya to meet his newborn child. “I could see nurses whisper amongst themselves as I passed by,” he told the Thomson Reuters Foundation by phone. “No one wanted to tell me how my family was doing.”

When Tanga saw his wife, Matilda, holding a pale-skinned baby with blondish hair, he realised she had albinism – a lack of pigmentation in the skin, hair and eyes. “My wife had a strange expression on her face, a mixture of fear and maybe something else,” he said.

As a biology teacher, Tanga was not fazed, unlike many Kenyans who believe the pigment disorder is a curse, dubbing those with it “zeru”, meaning “ghost”.

Tanga went to his wife’s bedside and lifted the newborn into his arms and said she was his golden child. “He immediately named her Goldalyn,” Matilda said.

People with albinism, estimated at one in 15,000 sub-Saharan Africans, are frequently shunned, attacked and even k****d. E*******n is critical because it gives them the chance to do safe, well-paid jobs, instead of being forced into menial work that exposes them to the sun.

Skin c****r is the primary k****r of people with albinism in Africa, according to local rights groups.

Taunted by other children

Parents often abandon children with albinism or keep them out of school because they are seen as mentally retarded – a path Goldalyn’s loving family chose not to follow. But they could not shield her from the p*******e she endured every time she left the security of home, near Kakamega, in western Kenya.

“She would get taunted by other children when she went to school,” said Tanga.

“Some children would pinch her just to see how she would react. We also lived in constant fear of her being k*******d.”

People with albinism are sometimes k****d for their body parts, which are prized for use in witchcraft. Stigma and social exclusion make it hard for them to access e*******n, health services and jobs. Many children with the disorder drop out of school because they are mocked for their appearance and there are not enough provisions for their poor eyesight, experts say.

But Goldalyn took the challenges in her stride. “She just kept working hard and working through some of the health conditions associated with albinism,” said her teacher, Augustine Manyengo. “Everyone liked her.”

Teachers attitudes are crucial, experts say. Because of ignorance around the condition, children with albinism in Kenya are often forced to enroll in special schools for the blind and to learn braille, which makes it harder to find work.

“Discrimination is the biggest hurdle,” said Isaac Mwaura, Kenya’s first senator with albinism. “First, at home, from parents unwilling to invest in their e*******n. Then, in school, from both fellow pupils and teachers – all work against them.”

If teachers are trained, they can assess the needs of children with albinism, who might need to sit near the front of the class or read larger print.

“Integration is always the better option as long as the teachers and students have enough information on albinism,” said Mwaura. “It is best for the children to learn with their peers.”
As Goldalyn sat at home watching the television news, she was thrilled to see her name flash across the screen.

“I was confident that I would do well. I had prepared for this moment since the day I started school,” said Goldalyn, who wears her hair in long, blond braids. “From an early age, I knew that it was possible to achieve anything I set my mind to.”

The ambitious teenager, whose younger sister also has albinism, hopes to become a psychotherapist. “I want to understand why the children who taunted me were doing so and what can be done to change this,” she said.