“If you want to innovate, you must be prepared to fail. At our bank, we take the approach Fail Fast Forward,” says Kenya Commercial Bank (KCB) Group Joshua Oigara when asked the secret behind the institution’s flurry of innovations that have culminated into untold success in the past five years.

The chief executive of the largest lender in the country by assets says that the reason the bank is so successful is that KCB is prepared to lose USD10 million (Ksh1 billion) every year while trying to come up with new innovations that will disrupt the market.

In an interview with financial services firm, KPMG in its Agile or Irrelevant 2019 East Africa CEO Outlook report Oigara adds that while the group is unsure whether the investment will be recouped, he avers that the risk is worth it because failure to take risk becomes an opportunity for a competitor.

“We also recognize individuals who tried and failed. To succeed, innovation must be championed by the CEO. We face increasing disruption in the market from non-traditional sources such as fintechs, e-commerce, mobile lenders and others. Customers have more choices, and if you are not innovating business in being taken away,” says Mr Oigara.

According to the seasoned banker, the financial services sector is a game of speed and the urgency to innovate is what will bring differentiation to any business in the market.

“If you are not innovating today, five years is too late.” quips the CEO.

The financial services sector is moving away from traditional brick and motor (branches to serve customers) to technology-driven platforms.

Innovation has contributed immensely to KCB Group’s profitability. In the nine months to September 2019, the group’s profit jumped by 6% to Sh19 billion partly driven by revenue generated from digital channels.

KCB also acquired National Bank during the course of the year to create a giant bank that is estimated to be worth Ksh1 trillion in assets by 2022.

In the recent past, KCB has launched KCB M-Pesa a virtual mobile-based bank account that is offered exclusively to M-PESA registered customers allowing them to borrow small loans between Ksh50 and Ksh1 million depending on the customer’s credit scoring.

The bank has also rolled out KCB Weka Weka, a savings initiative that enables customers to grow their mobile banking borrowing limits.

Conversely, the bank has also revamped its social media channels in a bid to woo more digital customers.

KCB has also borrowed a leaf from big corporations in the United States in facilitating its senior managers to go through the Harvard senior management training for Africa in a bid to expose its employees to new ways of thinking.

“We are investing in the team through global training programs, retraining on new business models, using data analytics to gain more insights, seeing a customer as a customer of any other business, and investing in IT platforms to enhance efficiency,” Oigara says.

Oigara also strongly believes organizations succeed not because they are large or small but based on whether they are fast or slow to act.

“We have adopted an agile model in our solution development. Success in business is a factor of how
one is able to act fast in the face of competition,” he adds.

Read >> Joshua Oigara: Why KCB Did Not Buy Chase Bank 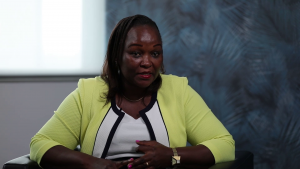