He said the duo violated his human rights and declared the nullification of his passport and declaring him an illegal immigrant null and void.

Justice Mwita said Miguna is a Kenyan citizen by right and acquisition of Canadian citizenship did not void the same.

“The government’s deduction to cancel Miguna Miguna’s passport and declaring him prohibited immigrant is unconstitutional and is hereby declared null and void,” he ruled.

“I find and hold that he did not lose his citizenship upon acquiring a Canadian passport,” ruled Justice Mwita.

He said even if the government had powers to cancel his citizenship, due process was not followed as he was not accorded a fair administration action process.

“Miguna Miguna was entitled to due process. Declaring Miguna Miguna a prohibited immigrant cannot stand since he is a Kenyan citizen,” the Judge averred.

Reacting to the ruling, Miguna, the self-styled General of the National Resistance Movement, an outfit formed by Nasa after boycotting last year’s repeat presidential action but later outlawed by Matiang’i, welcomed the decision asserting the government violated his fundamental rights, freedom and dignity and that he is a Kenyan and never lost his citizenship.

Justice Chacha Mwita has restated what I’ve maintained throughout: That the despots violated my fundamental rights, freedom and dignity and that I’m a Kenyan and never lost my citizenship. Thanks Dr. Khaminwa, @waikwawanyoike, @kamandamucheke, @NelsonHavi and other lawyers.

Miguna was deported in March after presiding over the mock inaugration of Raila Odinga as the People’s President. He was held in a toilet at the Jomo Kenyatta International Airport before he was put in a plane to Dubai after allegedly being sedated. He has resisted an resisted being put in a Qatar Airway flight by force.

Justice Mwita awarded him Ksh 7 million for violation of his rights and an additional Ksh 270,000 for damage to his property in order to deter such actions by “overzealous” state officers. 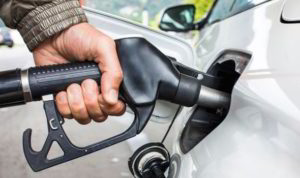