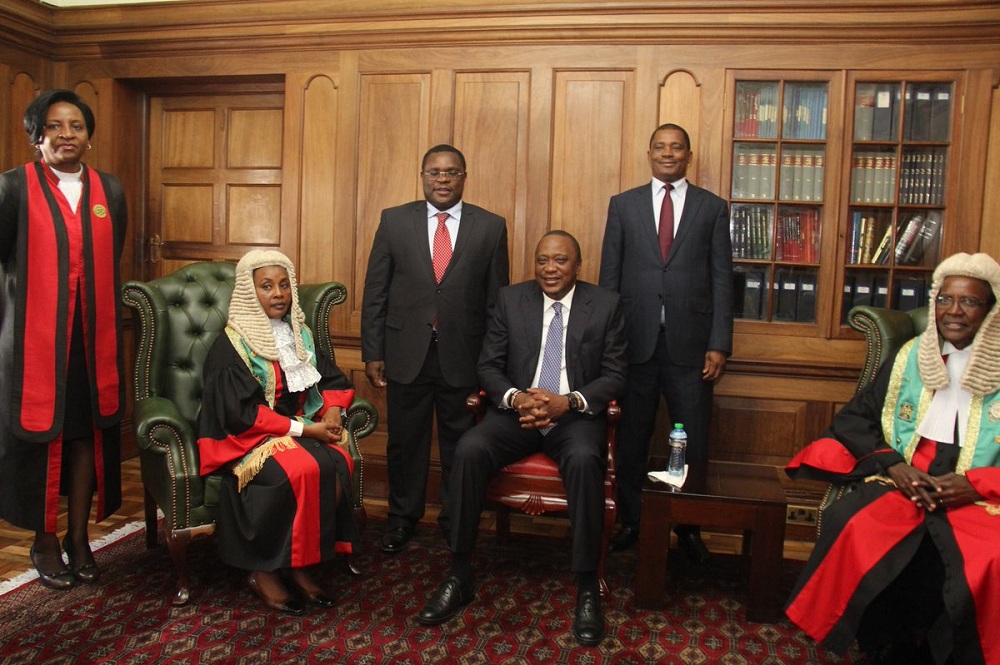 President Uhuru Kenyatta has urged the judiciary to be mindful of the effects of its actions on the other arms of government and how it will affect the lives of ordinary Kenyans while exercising its mandate.

The President said any decision that negatively affects the desire of a better, prosperous life of the average Kenyan or their safety and well-being should be carefully interrogated before being undertaken.

President Kenyatta pointed out that the administration of justice should not be shrouded in intrigues that only the elite may understand, saying the citizenry as a whole should be fully engaged in it since judicial authority is sovereign power of the people delegated to the courts through the Constitution.

“On this next matter, I speak from my experience as a politician.  You ought to accept that criticism comes with the office. Whether in media, in the journals, in the public baraza – and these days, social media –Kenyans will have their say, and little enough of it will be flattering, or even sensible,” the President said.

“That’s democracy; and I have learned that one does two things in response: first, simply grow a thick skin; second, consult,” he said in apparent reference to the criticism the Supreme Court Judges received when they annuled his win in the August 8 election.

At the time, the President hit out at the judges, terming them wakora (crooks) and owed to teach them a lesson.

READ: Ruth Kamande: Prison has taught me a lot

The apex court was on the receiving end again – this time from the Opposition NASA – after it dismissed petitions challenging his victory in the October 26 fresh election which was boycotted by his main rival, Raila Odinga.

President Kenyatta was speaking Friday at the Supreme Court in Nairobi where he witnessed the official release of the report on the state of judiciary and administration of justice by Chief Justice David Maraga.

The President said all three arms of government have been given mandate to serve Kenyans and thus need to work together to fulfil that mandate.

“We are all one government, serving one people and the national interests. We are independent but interdependent,” said the President.

The President further said he would work with Parliament to allocate additional funds to enable the judiciary relocate Court of Appeal to another place so as to create conducive environment for judicial officers to work effectively.

While encouraging the judiciary to guard its independence jealously, the Head of State urged it to talk to people within the law to hear their viewpoint also.

He cited the example of Parliament, which has mechanisms of consultation both with other branches of government and with the people.

“Follow suit. Kenyans are reasonable; what they want is to be heard,” President Kenyatta said.

For instance, the President said, the business community – in its desire to invest resources that will eventually grow the economy – looks forward to fair and timely decisions from the courts on the matters that may need judicial intervention.

“For example, there is still a long delay in resolution of commercial cases.  It still takes an average of 459 days to resolve one case according to World Bank data.  We have to find a way to reduce this sharply.  It hurts business,” he said.

In the same spirit of inclusiveness, the President said all parts of government should work in concert towards realisation of justice within the community.

He observed that the administration of justice is attained when the Legislature, Executive and Judiciary work together and not just when the Judiciary acts isolation.

“The Executive should offer the relevant backing for implementation of judicial decisions and Parliament should not only pass relevant legislation but also avail sufficient resources to the Judiciary.  This is the spirit of constitutionalism that is called for in Article 249 of our Constitution,” the President said.

In the same vein, President Kenyatta said the horizontal mechanisms of cooperation and consultation across government should be duly exercised, saying it is a constitutional principle that should not be misunderstood to allow interference with the independent mandates of the organs of government.

“The administration of justice is a national responsibility for all organs of Government and all citizens of Kenya.  It thus has to be pursued and promoted jointly, across government and at all levels, as a public good,” President Kenyatta said.

The President emphasised that justice is an important pillar of the people’s life and its promotion is an obligation on all arms of Government.

He congratulated the judiciary for the tremendous progress on its reforms, imploring to continue on the same path so that so that justice becomes the true shield and defender of every Kenyan.

Maraga assured the President that the Judiciary is committed to working with other arms of Government andindependent commissions to tackle the daunting challenges that confront the country, top among them being corruption.

“We in the judiciary have our own challenges with corruption, which we continue to address within our human resource function as well as through the Judicial Service Commission,” said the Chief Justice.