Twiga Foods CEO Peter Njonjo. He says that not all money is created equal. [Photo/GAFSP]

When people make it in life, many people see the success but not the struggles which created that achievement.

For one Peter Njonjo, the Co-Founder and CEO of Twiga Foods, getting to the top was not easy and the journey continues.

Speaking with GAFSP Private Sector Window’s Daphna Berman, Njonjo reveals that he had to go through myriad challenges before finally making head or tail of his business.

Njonjo says that building a start-up on the continent is a significant challenge.

“When we started Twiga, for example, I didn’t have access to credit and couldn’t lease distribution vans and so instead, I needed to buy them outright. That meant that instead of developing Twiga’s intellectual property, I used my limited resources to create and develop an ecosystem to help my business grow,” he says.

He adds: “That’s a huge hurdle for many businesses. In 2015, we had raised some money, but not nearly enough to unlock enough capital for Twiga, and so my wife and I agreed to sell our matrimonial home in Nairobi. I was working at Coca-Cola at the time and my wife had a very senior position at a Kenyan telecom company, and yet in addition to our life savings, we also needed to put our house on the market. Investors who are not familiar with emerging markets have a hard time understanding this ecosystem, but this is the reality for many African start-ups. This presents a huge opportunity for organizations like IFC, with support from blended finance, to provide an opportunity to create that ecosystem.”

Twiga started from an idea of exporting bananas but for Njonjo, the challenge was in getting enough bananas in a traceable way.

“Initially, my co-founder Grant Brooke and I wanted to export bananas from Kenya and though we got many orders from the Middle East, we quickly realized that we couldn’t export even a single container.’

He says that farmers had no traceability or record-keeping, agronomic practices were poor, and there was a lot of informality in the farming sector. Thus, he and his co-founder needed to pivot and quickly saw how inefficient the sector was.

“Consumers in Africa spend about 50% of their disposable income on food and the source of this inefficiency is retail fragmentation: Nairobi has 6.5 million people fed by 180,000 individual retailers,” he adds.

Njonjo says that in countries with a more consolidated retail market, consumers spend less on food.

“By using technology to aggregate the retail demand in the informal market, Twiga creates an efficient supply chain, so that we’re able to supply lower cost and better quality food to retailers,” he notes.

On why he left the prestigious Coca-Cola job for a start-up, Njonjo says growing Twiga needed him so he had to move.

“I had a very illustrious 21-year career with Coca-Cola and was one of the youngest business unit presidents in the company. But I could see that Twiga had gotten to a point where it needed more structure. My co-founder got Twiga off the ground, but we needed a strategy to continue growing. My experience at Coca-Cola is very valuable to a company like Twiga and since making the transition to Twiga in April 2019, it has worked out very well. We’ve quadrupled our monthly revenue this year, which is testament to the fact that the opportunity is there. What we need is the organizational structure to help Twiga realize its vision.”

Doing Good Can be Good Business

Njonjo notes that the experience at Coca-Cola played a huge part in his taking the reigns at Twiga.

“At Coca-Cola, we learned how to better distribute products in very small villages across the continent. I directly managed about 40 countries for Coca-Cola in Africa—an experience that helped me understand how to structure retail processes. Coke is a very well-distributed product across Africa because the company has done a great job in building a brand, creating demand, and ensuring momentum to support the distribution infrastructure,” he says.

Njonjo adds that Twiga now supplies high-velocity food such as bananas, potatoes, tomatoes, onions, and watermelons— foods that you find on the table every day.

“The idea is to leverage the velocity that exists in these foods to build a cost-effective distribution network. There’s a strong parallel there with the work I’ve done previously at Coca-Cola, but it’s also allowing me to leverage the expertise and knowledge I’ve accumulated over the last 20 years to lift up my community and remove barriers to commerce.”

Today, Twiga has about 8,000 retailers with some 4,000 active retailers ordering every day.

“We have more than 17,000 farmers, which shows you that doing good can be good business. Businesses like ours are changing lives on the ground and giving people opportunities to earn livelihoods where they could not before.”

Njonjo reveals that over the next year, they are planning to expand across Kenya and have already lined up operations in Mombasa and Nakuru.

“We’re also looking at international expansion—either in East Africa or West Africa— and have just closed an additional round of financing.”

Njonjo attributes their success to the assistance offered by IFC and GAFSP which he says were instrumental in helping them overcome barriers that many African entrepreneurs face.

“They have provided buying power that we’ve been able to harness for our retail aggregation.”

In addition to equity from IFC and GAFSP, IFC is putting together a guarantee that is available to local banks where farmers can go to those local banks and borrow against that facility to better capitalize their farms, improve agronomic practices, and become more reliable suppliers for Twiga.

“IFC has given us a lot of credibility with different stakeholders and by virtue of their stature, they’ve provided us with a seat at the table when it comes to agricultural policy. Indeed, GAFSP and IFC have provided us far more than just financial backing, because as I like to say, not all money is created equal,” he adds. 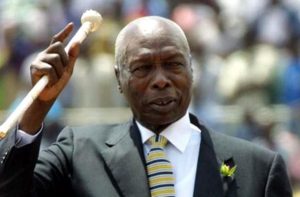