Interior Cabinet Secretary Fred Matiang’i has declared Tuesday 11th February a public holiday to give Kenyans an opportunity to mourn the loss of their former and longest-serving president.

In a gazette notice, the CS said the holiday will accord all Kenyans the opportunity to attend the National Memorial Service in honour of the life of the retired president. Moi died on Tuesday 4th February at an official age of 96.

“The Cabinet Secretary for Interior and Co-ordination of National Government declares Tuesday, the 11th February 2020, to be a public holiday throughout Kenya in order to accord all Kenyans the opportunity to attend the National Memorial Service in honour of the life of the late H.E Daniel Torotich arap Moi,” the gazette notice reads in part.

Matiang’i has declared the National Holiday shortly after Head of Public Services Joseph Kinyua called for it. Kinyua said that there needs to be a day to allow Kenyans to mourn the late former president Daniel arap Moi.

Moi’s body is expected to be at Parliament building from Saturday, February 8 to Monday, February 10, 2020. President Uhuru Kenyatta will lead the nation on Saturday in the viewing of the body, as well as paying the last respects.

The public viewing at Parliament Buildings will be done on Saturday, Sunday and Monday between 8.00 am to 5.00 am. President Kenyatta, who is on a state visit to the US, had earlier announced a period of national mourning effective from 4th February, the day Mzee passed.

The late Mzee Moi will be accorded a state funeral on Wednesday 12th February 2020. He will be buried at his home in Kabarak.

Next>> Moi’s Need for Speed and Other Things He Liked 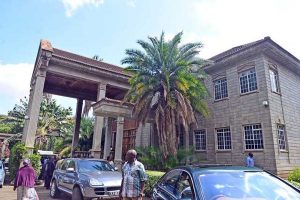 Moi-Owned Media House Given Access to Kabarak Home, Others Denied
Sons of the late former president and chief stakeholders are…