Equity Group CEO James Mwangi poses beside the Bloomberg 50 banner. He has been ranked among the world's Top 50 Business Leaders.

Equity Group Chief Executive James Mwangi has been named in The 2019 Bloomberg 50 which fetes the world’s top 50 individuals with the most formidable achievements in their line of work.

Bloomberg 50 honours Mwangi for driving Equity Group’s aggressive expansion strategy that seeks to ensure Equity Bank’s presence in 10 African economies by the end of 2019 and 15 countries by 2026.

While ranking Dr Mwangi, Bloomberg factored in his contribution in steering Equity Bank’s presence in the greater Central and Southern Africa region.

This is through the bold move to expand to DRC, Mozambique and Zambia’s banking sectors through transactions with the Banque Commercial du Congo (BCDC) and Atlas Mara Ltd respectively.

“Two deals in Southern and Central Africa will give Equity Group, which has more than 14 million customers, access to 2 million more,”

Equity Bank also opened a representative office in Ethiopia, becoming one of the biggest banks with regard to customer penetration in Eastern and Central Africa.

Welcoming the award, Mwangi said that he is honoured to feature alongside 50 brilliant minds adding that he will not relent pursuing his ambition of ensuring financial inclusion of the majority of the African people.

“I am honored to be part of this incredible group of people, who are changing the world in significant ways and driving their important messages home, with commitment and passion,” said Dr. Mwangi.

“The group’s innovative and competitive products are tailored to empower our consumers, businesses and communities whilst also delivering significant value to its stakeholders.”  He added

The Bloomberg 50 represents the most influential thought leaders in business who merit recognition and applause for their achievements in the business scene.

It highlights inspirational innovators, entrepreneurs, and leaders who are changing the game in quantifiable ways – from finance to fashion, entertainment to manufacturing, biotech, philanthropy and many other disciplines.

Each year, The Bloomberg 50 honourees are celebrated in a special issue of Bloomberg Businessweek across all the publisher’s platforms.

Dr. Mwangi has over the years been recognized locally and globally for his contribution to the socio-economic transformation of the people of Africa.

He was named by the Financial Times as one of the top 50 thought leaders in emerging markets and among the top 20 most influential people in Africa.

Back home, Dr. Mwangi has been vested with the First-Class Chief of the Order of the Burning Spear (CBS) national decoration-the highest presidential award to a civilian, for outstanding contribution in economic development. He has also been awarded the Moran of the Burning Spear (MBS) and Head of State Commendation (HSC). 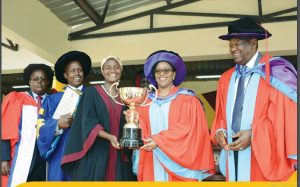 Emeritus Strategy For Reclaiming Public Service Credibility
An efficient and effective, public sector is vital to the…