Cape Media, which runs TV47 television station, has advertised the position of CEO as it seeks to substantially replace Eugene Anangwe who resigned in June 2020. Mr Abubakar Abdullahi, then a news anchor, was appointed as Chief Executive Officer and has been acting ever since.

A substantive CEO is expected to take over TV47 enters the critical period of election coverage, where media houses show their might and expertise. It is during election coverage that TV stations either gain or lose audiences. Being the first election for TV47, Cape Media board of directors led by Prof Simon Gicharu, is not leaving anything to chance.

It hopes competitive hiring will attract diversify talent from which the company can pick a CEO. Internal sources at Cape Media indicated that Mr Abdullahi, the acting CEO, is eligible to apply and still stands a chance of retaining the highest job at Cape Media.

A free to air television station, TV47 is currently enjoying fast growth in a fairly crowded broadcast industry. It was launched in June 2019 with head offices in Nairobi under the slogan, Untold Stories. It delivers educational news and entertainment across the country with a presence on DStv, Signet, Bamba and StarTimes platforms.

The substantive CEO will be tasked with growing the TV station and taking to the next level both in audience ranking and advertising. The TV station has a second modern studio in Mombasa has built up strong arm of presenters and reporters.

According to a newspaper advertisement, the successful candidate will be tasked with the overall growth and transformation of the station in keeping with the dynamic nature of the Kenyan media industry.  The CEO’s duties and responsibilities will include leading the development of the company’s short- and long-term strategy to maintain the TV station’s competitiveness and growth.

He or she will also champion efforts to ensure the company maintains high social responsibility and professionalism, while also minimizing risks. Others include coordination of overall staff management, talent development, career advancement and training. 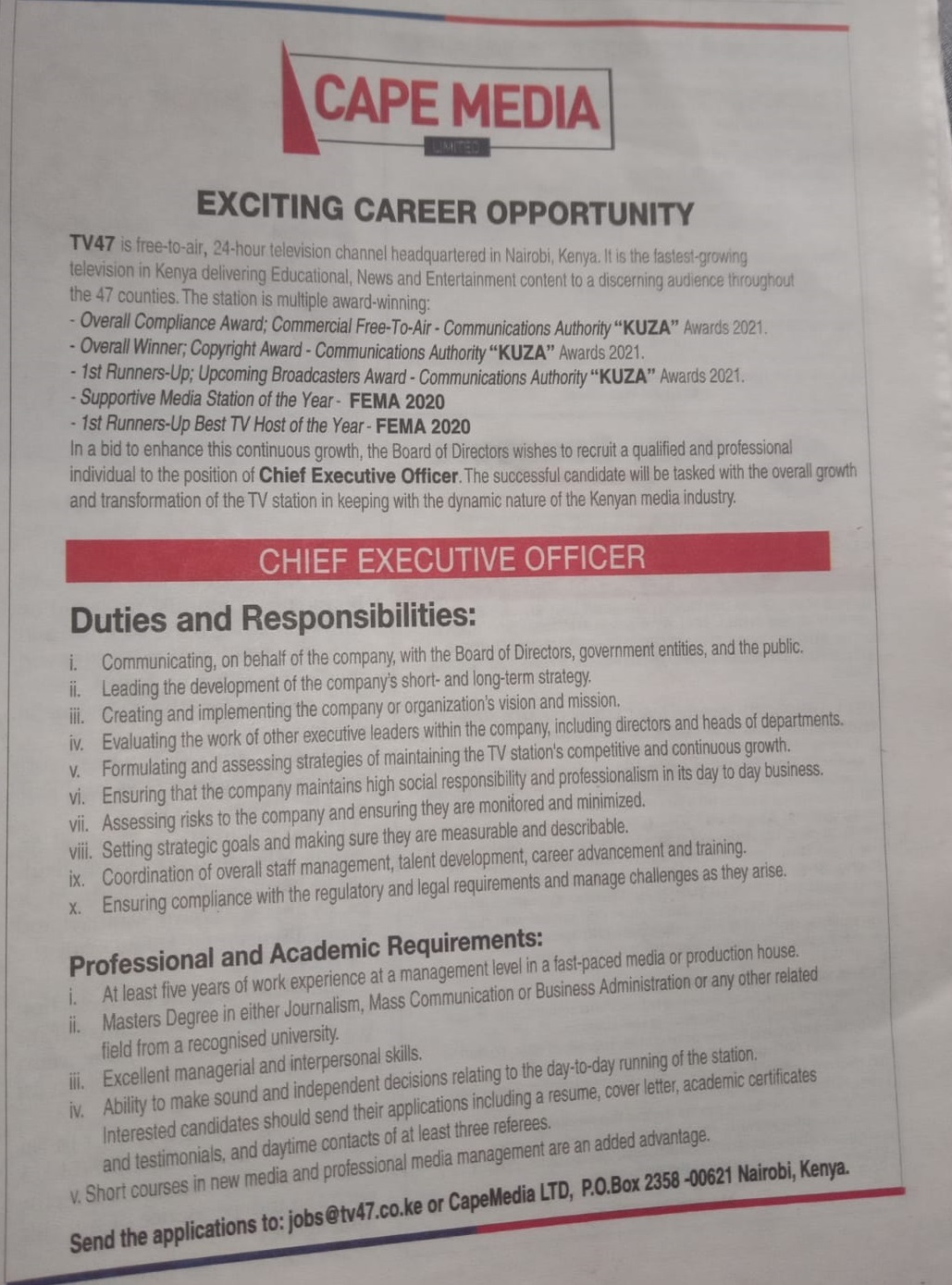 Professional and academic requirements include five years experience in management in a fast-paced media or production house. The ideal candidate will be required to have master’s degree in either business administration, journalism or any other related field. He or she should be excellent in managerial and interpersonal skills and possess the ability to make independent and sound decisions.

See Also >> Two Years On, TV47 Giving The Big Boys a Run For Their Money

TV47 has curved a viewership niche between the 18-45 years age group by living up to its mantra of ‘Untold Stories’. According to Geopoll research, TV47 has rise to position 5 in terms of audience reach, behind market leader Citizen TV, NTV, KTN Home and KTN News.

It has effectively overtaken older players such as K24, Switch TV and KBC among others, with only two years in the market. Awards include KUZA Broadcast Awards, 2021 by the Communication Authority of Kenya, Fresh Entries Music Awards (FEMA) 2020, Media Council of Kenya (MCK), and International Centre for Journalists (ICFJ).

Next >> It’s Time To Live Nairobi: It Does More Harm Than Good To Finances