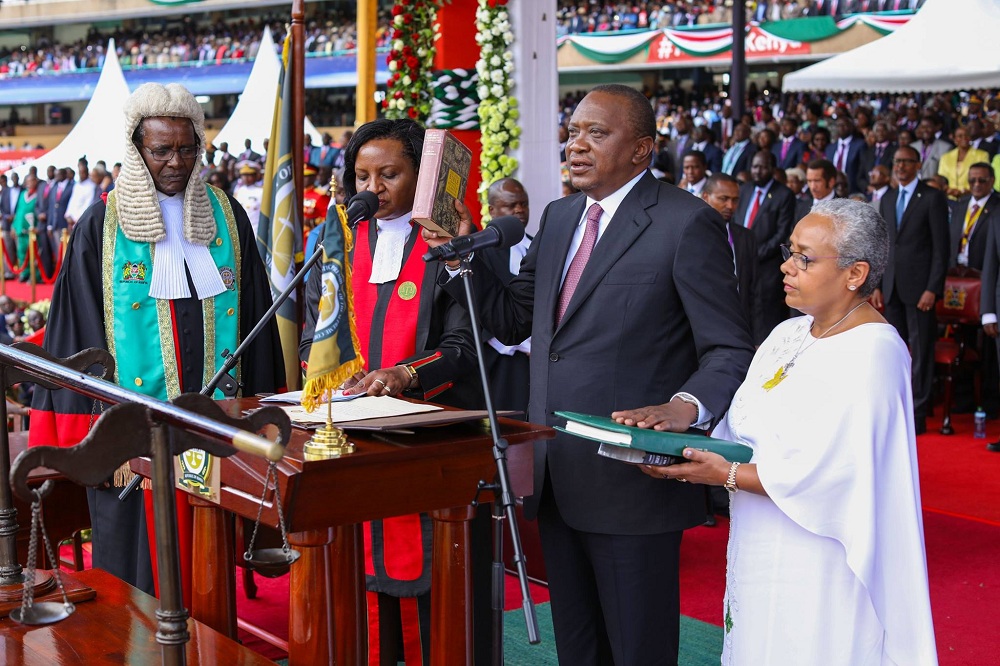 If you were only watching the official news coverage of the inauguration of Uhuru Kenyatta and William Ruto for their second term, you would be forgiven for thinking that the political crisis that has seized Kenya since August 11 was over. At the Kasarani stadium, local and international dignitaries watched as the incumbent president and deputy president were sworn in, in a ceremony that cost an estimated 384 million Kenya shillings ($3.7m).

But if you are active on Kenyan social media or have been following the story on international media, you would know that the story is a little more complicated. Even though local media refused to cover it, the Kenya police violently suppressed a prayer rally called by the opposition candidate, Raila Odinga, at the Jacaranda grounds in Embakasi.

Startling images of towers of black smoke rising over the city’s largest working-class neighbourhood, while white plumes of tear gas scattered civilians hoping to attend the prayer rallies, circulated on these platforms, even while the mainstream media focused on the more inane details of the swearing-in ceremony.

This dichotomy is symbolic of the deep damage that the 2017 general election has done to Kenya, leaving the country more divided today than it has been, perhaps, since the 1969 Kisumu massacre. One part of the country celebrates what it sees as a political triumph; another part is reeling from a keen sense of disenfranchisement. And a third – the silent majority that doesn’t benefit directly from dominant ethno-nationalisms – witnesses both with palpable concern.

Twenty years of struggle for a new democratic order should not have culminated in this Dickensian dichotomy – this gap between reality and the state-sanctioned narrative.

The next five years are going to be extremely challenging for Kenya. For one, Kenyatta enters State House with the weakest mandate of any Kenyan president in history. On October 26, more than 7 million people out of the 15 million who participated in the August 8 election did not vote again, signalling that they did not believe that the election rerun was worth their time.

Even if Kenyatta legitimately won the election, it is bad taste for institutions to push ahead with an inauguration without addressing the underlying concerns. Many Kenyans feel unheard.

Politically, the big challenge for Kenyatta and Ruto will be keeping their coalition united.

Moreover, the 98.2% margin by which the election was won is a statistical improbability in a truly democratic society. This improbability will undercut the legitimacy of the administration, posing serious challenges to rule of law in the country.

State legitimacy is necessarily about belief – people obey rules and laws because they believe the state is a legitimate authority. If citizens don’t believe their state is legitimate, they will routinely challenge its authority. The question for Kenya today is how these challenges will manifest.

Many institutions have also been severely damaged during this electoral process. It is unlikely that the Independent Elections and Boundaries Commission (IEBC) will survive in its current iteration. As in 2007, once the heat of the election dies down, individual commissioners and officials will have to deal with the reality of an electorate that does not believe that they are capable of doing their jobs well. We can expect more elections to be challenged in court and more doubt cast on the commissioners’ mandate.

SEE: Hemingways Watamu back in the market after Sh1.2b facelift

Similarly, it is difficult to believe that the reputation of the Kenyan police could get any worse, but it has. The disproportionately violent policing of the opposition has planted a kernel of anger and frustration that will make it difficult for the police service to function, particularly in informal settlements in Nairobi.

There are already allegations of genocide, since, in legal terms, genocide isn’t about the scale of violence but the intention behind it. Arguably, the police have demonstrated intent to destroy, in full or in part, members of a community because of their putative support for a particular political opinion. Unless dramatic action is taken to deliver justice for victims of police violence over the last four months, this kernel of frustration will likely germinate into something darker.

Politically, the big challenge for Kenyatta and Ruto will be keeping their coalition united. Their political alliance was created to counter the threat of Odinga or the International Criminal Court; now both are no longer a threat.

As the economy stumbles through mounting public debt, eye-watering corruption and shrinking national productivity, it is unclear how the administration will fulfill the vast promises made during the inauguration.

Having secured a second term, there is little incentive to keep the diverse interests under the Jubilee umbrella together, and in a country where few political parties survive more than two election cycles, Kenyans are waiting to see if Jubilee will make it to 2022.

The opposition after Odinga

The coalition has paralysed legislative business by refusing to participate in parliamentary committees, that may not be a sustainable strategy in the long run. An economic boycott is hurting the interests of specific organisations, but, unless the opposition offers a coherent political strategy soon, it will likely fizzle out.

READ: Radio Africa taps David Makali to save the Star

Coalition leader Raila Odinga will likely retire from electoral politics, leaving behind a deeply divided political unit with no clear successor. In some ways, this will be a good thing for Kenya. Odinga has defined Kenyan politics across the spectrum for the better part of the last 25 years, and it will be interesting to see if Kenyan politicians are even capable of articulating an idea that is not “anyone but Raila” or “no one except Raila”.

For the third pillar of Kenyan society, those who don’t feel particularly strongly about either Jubilee or NASA and are so often ignored in political thought and analysis, the next five years will be difficult, but also an opportunity to build. For women, shut out of every major political decision undertaken in the last four months, the lesson of the 2017 election should be that Kenya’s patriarchal politics does not care about women, regardless of their political affiliation.

Kenya is ripe for a feminist revolution. For civil society, the events of August 11 to September 21 are a sign that things will get worse before they get better. The Kenyatta administration has made it clear that they see civil society as an enemy, and organisations will need to regroup and restrategise if they are to effectively protect hard-won rights and freedoms.

Overall, the stark dichotomies of this inauguration day are a reminder that Kenya has entered into the most challenging five years of its democratic history.

This article was first published by Al Jazeera. The views are the author’s own and do not necessarily reflect Al Jazeera’s editorial policy.

How Kenya Can Become a Green Economy