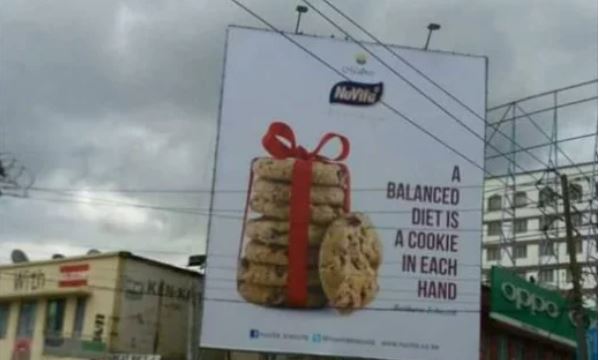 [dropcap]W[/dropcap]hen I saw the blatant billboard advertising along Likoni Road in Nairobi’s industrial area some weeks ago, for a moment I thought I had misread the message. The graphics portrayed a number of cookies tied with a red ribbon, besides which the message read in caps: A BALANCED DIET IS A COOKIE IN EACH HAND.

To the non-discerning eye, this is a harmless, albeit creative ad. A literature student might even give the copywriter the thumps up for the effective use of poetic licence. However, a media analyst will tell you that there is nothing innocent about the message. It is as duping as it sounds, more so due to the fact that the product is mainly targeted at children, who innocently take things at face value.

Indeed, how did this message pass muster through the gatekeepers both at the client and ad agency? Did the team pilot the ad with different individuals and focus groups of parents and other potential customers? Who comprised the creative team in terms of demographics and experience? I mean, such a major goof could not have been deliberate; or was it?

The result is that the manufacturing company, Nuvita Biscuits, has lost quite some credibility. By trying to be ‘clever’, the company has appeared reckless and also gathered a lot of negative publicity. The offending agency, if one was used, is still unknown, and has left the company to face the public alone with egg on its face.

As is the norm in Kenya, the authorities address a crisis only after Kenyans on Twitter have run amok! The resultant uproar on social media jolted the Ministry of Health’s (MoH) Director of Public Health to publish a public notice on advertising of food and food products. In a paid ad, the Department spelled out several guidelines that regulate claims on food products, which must strictly be adhered to.

ALSO BY THIS AUTHOR

> Is Nation Media becoming too hot to handle?

The MoH-affiliated Kenya Nutritionists and Dieticians Institute also published a public notice in the Press, warning against advertising or availing food products or supplements for public consumption without undergoing laid down regulations. The institute cited the need for observance of Sections 6 (c), 6 (e) and 36 (2) of the Nutritionists and Dieticians Act, 18, 2007 which warn against false nutrition claims on food products and supplements.

I never saw or heard a word concerning this scandal from the Kenya Bureau of Standards (KeBs). May be they were complicit, since the products on sale had the agency’s seal of approval. Such an ad was definitely unethical in this day when health experts recommend minimal consumption of processed sugars and gluten in order to curb rising obesity, particularly among children and the youth.

Let us look at the bigger picture. Most of advertising in Kenya reflects the impunity pervading our society. While the Nuvita ad could have been the case of an unprofessionally hurried job, it smirks of the ‘publish and be damned’ attitude that has become our media’s stock-in-trade.

The advertisers knew well the worst punishment would be a slap on the wrist, which is exactly what they got.

In the United Kingdom (UK), advertising is regulated under The Business Protection from Misleading Marketing Regulations 2008. This statutory instrument prohibits advertising that misleads traders, and gives strict guidelines on comparative advertising. The regulation also bestows the duty of implementation on every (law) enforcement authority.

In America, the statutory Federal Trade Commission (FTC) works for consumers to prevent fraudulent, deceptive, and unfair business practices, and to provide information to help spot, stop, and avoid them. Federal law requires that ads must be truthful, not misleading, and, when appropriate, backed by scientific evidence.

Through the FTC Act, the Commission enforces truth-in-advertising laws regardless of where an ad appears – newspapers and magazines, TV, online, mail, billboards or buses. The FTC monitors advertising claims that can affect consumers health or their money. Products covered include food, over-the-counter drugs, dietary supplements, alcohol, tobacco, high-tech products and the Internet. The FTC also monitors and writes reports about ad industry practices.

Creativity is the mainstay of advertising; so we cannot recommend spoiling the fun, or promoting mediocrity! However, this poetic licence has been largely abused by ads that make fictitious, unsubstantiated, false or outrageous claims. The worst offenders are products in the overcrowded and cut throat fast moving consumer goods sector like toothpastes, soaps and detergents, soft drinks, alcoholic drinks and food products.

Some ads have been clear cases for class action for misleading consumers. Unfortunately, the consumer rights lobbies in the country are feeble. This could be as a result of acute capacity and resource challenges to face big corporate, while officials may even be compromised to drop cases.

A quasi-statutory Advertising and Marketing Standards Board would have the powers to analyse advertising content before it is sent to the media for broadcast or publishing. It would also receive complaints and recommend meting out of measures or sanctions, either legal or ethical, against offending ads.

DStv Customers Get a Lift To More Exciting Content