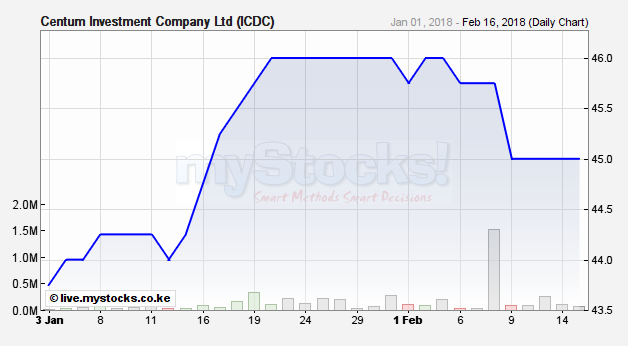 The Nairobi Securities Exchange ended the week on the edge, with turnover dropping by 59% to Ksh2.7 billion on a volume of 98M shares, down from KSh6.6 billion on 215M shares posted the previous week. The fall has been attributed to foreign investors keeping off the market as political tenstion continues to plague the country.

The trend was a continuation of the 51% decline on Thursday in a session dominated by local investors. Local investors’ participation stood at 65 percent while foreigners, who usually do the bulk of the trading, contributed 35 percent, down from 50% on Wednesday

The tension arose from the swearing-in of opposition leader Raila Odinga as the “People’s President”, a ceremony the government outlawed and wich led to a crackdown on opposition elements.

The Construction & Allied Sector traded shares worth Ksh84.9M which represented 3.12% of the week’s traded value. Bamburi Cement was the most traded counter in this sector during the week with 458,000 shares valued at Ksh80M changing hands at between Ksh174.00 and Ksh180.00.

The Energy Sector had Ksh340M shares traded and accounted for 12.52% of the week’s turnover. KenolKobil stirred up activity in this sector during the week with 17.8M shares valued at Ksh267M changing hands at between Ksh15.00 and Ksh15.50. KenGen shares slipped by 1.20% to close the week at Ksh8.20 with shares worth Ksh42M realized.

In the Investment Sector, shares worth Ksh63.8M traded and accounted for 2.35% of the week’s turnover. After touching a 12-Month high of Ksh46.50, Centum eased down to close the week at Ksh45.75 with shares worth Ksh62.5M realized.

The Bond Market recorded reduced activity during the week with bonds worth Ksh13.3Bn transacted compared to Ksh18.7Bn posted the previous week.

NEXT: 10 things you must always remember when investing

Beauty Firm Flirts With NSE In Quest to Raise Capital